Start a Wiki
This is an article about Flanger, a character created by Alphonse Uprising on 07/22/2015. 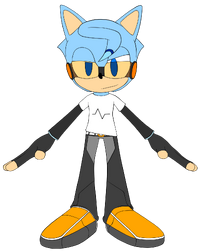 "Alone, I only make noise. But if we stick together, we can make the perfect song."

Flanger is a blue hedgehog from Kyoto, Japan. He has Sound Manipulation, the ability to control sound.

Flanger is a blue weasel with bangs that curl from the top of his forehead to the left of his head. He also has a pair of headphones that have outlines that glow blue when he uses his powers.

Flanger, as the leader of Soundbank, is very careful about his fellow members, and actually calls him their family and "the only ones they got".

Even though he shows very irresponsible behavior and a hellbent attitude, Flanger, on the inside, has a good heart and knows right from wrong.

Flanger was born on November 11, 1990 to Chiyoko and Jun Nobuyuki. When he was only 7 years old, he was determined to be a righteous leader. His favorite childhood games were "Follow The Leader" since he considers it a form of training. When Flanger turned 12, his father died from a lenghty battle of brain cancer at the age of 39. His nightclub was closed down and they lost money.

Years after his father's death, Flanger was depressed. His mind was gone and he had nowhere to go. Then, he let his own peevishness control him. At the age of 15, Flanger illegally takes back the Trans-Japanese Soundbank, only to turn it into his own street gang. Flanger was arrested and sent to jail after a failed attempt to rob a bank. In jail, he meets Stereo, a female weasel who understands his pain, and Arp, a red mink who had selective mutism. Together, they teamed up and broke out of jail, and quickly became Japan's most wanted.

Flanger  became the love interest of Stereo The Weasel, and soon, this blossomed into romance. Then, gang grew bigger. Years later, Synth, Reverb, and Echo became members of the Trans-Japanese Soundbank, and they now control a majority of Tokyo's Shinjuku district. A third of Tokyo is now covered in graffiti to indicate their base of operations. Then, this quickly caught the intention of the Upsilonish Network of Intelligence Bureau.

Thanks to the headphones of his own design, Flanger can produce soundwaves powerful enough to take damage. This is known as Sound Manipulation, as he uses waves of sound as lethal weapons. Due to this, he has been enlisted on Upsilona's Most Wanted.

Flanger can take serious damage from noise if its resonance is high enough.

Retrieved from "https://sonicfanon.fandom.com/wiki/Flanger_The_Hedgehog?oldid=1839024"
Community content is available under CC-BY-SA unless otherwise noted.