Flame the Torracat is a character who appears in The Legend of Fox the Brave. He is a male Litten with no known biological family who was taken in by Pebble the Lycanroc and Aria the Zoroark, and the adopted brother of Hope the Lycanroc and Shade the Zorua. While originally taken care of by Dakota in SwiftClan, this aspect of his past was retconned as of the series overhaul. He was still taken care of by Dakota, but didn't live in SwiftClan. As of the story A Grand Return, Flame is now a Torracat. 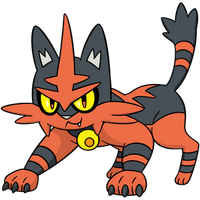 As Litten: Flame resembles a small kitten. He has mostly black fur with a red muzzle, a red pattern on his forehead, two long three-pointed "whiskers" on his cheeks(one on each cheek. He has two red stripes on each leg, just above each paw, a tufted tail, and a couple of upward-pointing spiky tufts on his head. Finally, he has a small black nose, and red eyes with yellow sclera; when the fur on his back bristles up, it becomes red

As Torracat: Flame is much larger in size, around the size of a large house cat. He has black and orange fur, a bushy tail-tip, orange eyes with yellow sclera, a firebell on his throat, and claws visible on his forepaws.

As Litten: Flame is a typical friendly and happy young boy. He enjoys wrestling with his adopted siblings, and is fiercely loyal to the Storm Fighters. He is also eager to get stronger, as he often tries to emulate older Pokemon warriors' attacks in an effort to get strong.

As Torracat: Flame is calmer and more level-headed, but retains much of his old personality, as he is still eager to get stronger, and is constantly trying to best others in training bouts he's in.

A Grand Return: His role is currently unknown, but it was confirmed that he will evolve sometime in this story.

Being a pure Fire-Type, Flame is weak to Water, Rock, and Ground-Type Pokemon. 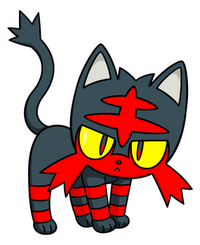 Flame was originally going to remain as a Litten, but this was changed.

Retrieved from "https://sonicfanon.fandom.com/wiki/Flame_the_Torracat?oldid=1850006"
Community content is available under CC-BY-SA unless otherwise noted.