You don't understand a word do you? 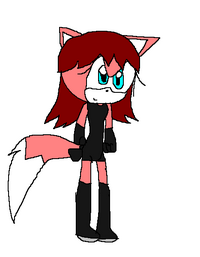 Fiona the Wolf (フィオナ·ウルフ), sometimes known as Fiona Wolf, is a fan character created by User:Fat Fionna Fan and is her fursona. Fiona is a 16 year old wolf who is a resident of Mobius. She works as an assassin and secretly has a crush on Scourge the Hedgehog, although she denies it at times.

Fiona is a female wolf. Her fur is pink, her muzzle is white, her stomach is white, and her inner ear color is white. Fiona's eyes are ice blue. Her shoes are black. She has two eyelashes on each eye. She wears a black suit, black gloves, and black shoes. She has dark red hair.

Being an assassin, Fiona kills the evil people for peace. She has a very good heart, she never gives up, and is one of the most optimistic characters. She almost never seems to find anything hopeless. Fiona is more of a tomboy.

Being an assassin, she has very good aiming skills. Fiona possesses super speed and can go as fast as Scourge. Fiona seems to have acquired even greater speed and stamina than she had previously. And its revealed she can go invisible.

Fiona has never died before. But sometimes, she fears that she would be killed.

Scourge the Hedgehog is Fiona's crush, but she denies it at times. Scourge doesn't even have a crush on her, due to being in a relationship with Fiona Fox. However though, Scourge thinks of her as a very good friend.

By using all seven Chaos Emeralds, Fiona can initiate a super transformation called Furious Fiona. This is by far Fiona's most frequently used transformation. In this state she can run more faster, stronger and nearly invincible. She does, however, need rings to maintain this transformation or else she will revert to normal. 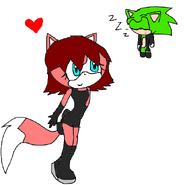 A custom wallpaper made by FFF 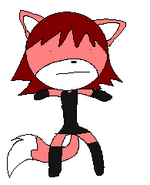 OH GLOB! WHAT IS THIS?!
Add a photo to this gallery

Retrieved from "https://sonicfanon.fandom.com/wiki/Fiona_the_Wolf?oldid=1686534"
Community content is available under CC-BY-SA unless otherwise noted.