Start a Wiki
This is an article about Fiona Fox, a character created by Konnichiku on 03/7/2015. 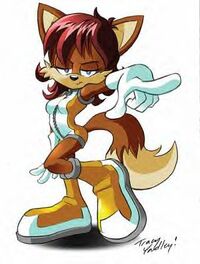 Fiona has tan fur and red hair. She wears a white bodysuit with orange stripes on it. She wears white gloves and white-and-orange boots. She wears a yellow bow in her hair.

Fiona is hard-nosed and hard-willed. She is friendly to Sonic, Tails, Amy, and the rest of the gang. Fiona is compassionate and will attack anyone who hurts Sonic. An example of this is when Fiona helps Sonic when he's drowning.

She was born on an island far from Mobius. Tails met her on vacation and they became friends. Shortly afterwards, Fiona moved to Mobius. She made friends with almost everyone there. After everyone got caught up in a white void sweeping Mobius and Sonic reversed it by defeating the Time Eater, Fiona became the band manager for Amy, Sally, and Mina. She has been with them ever since. When Infinite wreaked havoc in an alternate universe, Fiona drove the Brinks truck the Sonic Forces used to travel.

Fiona has the power to use Chaos Control and Chaos Light.

Fiona can glide, grind, and climb up walls, similar to Knuckles the Echidna. She also is a master of martial arts and hand-to-hand combat.

Fiona can jump high, like Amy Rose. She also has excellent searching/locating skills. Fiona is a secret agent for the Mobius Patrol Squad, a job that Amy used to have and would later continue to.

Retrieved from "https://sonicfanon.fandom.com/wiki/Fiona_Fox_(Mobius_Redrawn)?oldid=1824588"
Community content is available under CC-BY-SA unless otherwise noted.