Oh, come on! You'd look adorable in this dress!

Fifi the Bear is an original Saffron Yellow, anthropomorphic Sonic Fan Character created by pumpituppartyzone. She was created on a game called Sonic Charrie Maker. Fifi really likes her team, except for Razz. She is the Flight Formation of Team Wild.

Fifi's personality is a lot like Sonic the Hedgehog's. She is very arrogant and fond of herself. Many boys at her school flirt with her and try to ask her out, and she loves when this happens. Along with this, she is said to only hear what she wants to hear. She is also said to be a little kid at heart. She loves to make new friends, and is obsessed with playing dress-up. Fifi loves small animals, and especially loves flickies and chuchus. She has a very bubbly personality and likes to offer people things. Fifi also enjoys baking things for people. Usually, she makes things for people and delivers the treat to the, accompanied by Lumpy Space Princess.

Because she used to need energy to chase Razz, Fifi has an incredible amount of stanima. She runs at normal speed, and she can use her gloves to teleport. She uses her best flicky, Coco, to attack her enemies in many ways, mostly because she does not like to hit people. Her trap attack is her one of her many chuchus that follows her opponent and explodes, much like Tails' trap attack. Fifi can also summon up to 5 kapukapus that chomp on their opponent. This is a very powerful attack. Being the fly type of her team, Fifi can also glide, making her a treasure hunter as well. Although, it is unknown how she can fly, because bears (and echidnas) do not fly in nature. It is believed that she got a permenant potion from Hazel the Hyrax.

Fifi is one of the team captains in the game, Baseball Party Zone. Her team name is "Bear Rangers", her special throw is the "Honey Ball", and her special hit is the "Sweet Swing". Her default stadium is "Honeycomb House", and her team consists of herself, Razz, Jake, Raven, Squeaky, Allen, Chestnut, Coco, and Phoebe.

After Razz "broke up" with Fifi, Jake started to warm up to Fifi a lot more. Many times, Jake gets Fifi to play pranks on Razz when he is up-tight or when he's drooling over Phoebe. Fifi enjoys the pranks, but usually gets in trouble for them afterward.

Fifi and Max are very good friends. They teach eachother different ways to fight, and they have fun with it. While fighting Epsilon, Fifi used Max's jelly hammer on it. They have lots of fun with eachother, despite the age difference.

Allen and Fifi met in the 6th grade, and Allen got an immediate crush on Fifi. However, he is good at hiding things, so he did not tell her for a long while. He just couldn't take it, so he told Razz and he told Allen to pin Fifi against her locker and kiss her (just to be funny and see how it might turn out). Interestingly, after this happened, Fifi has shown interest in Allen. However, it is unknown whether she likes him or not.

In the Roleplay: Mobius Basketball Tournament, Teniahk was born from Vitani and Darkstorm. Fifi said that she was sweet, and Teniahk immediatley jumped into her arms and had Fifi care for her. She jumped into others' arms a few times, but just came back to Fifi. Fortunatley, Fifi is good with babies, so the two of them get along well.

The Wobbly Men from Demension 10 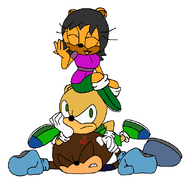 Ned tries to sweep Fifi off of her feet. However, Fifi claims she has a boyfriend. Base from http://browse.deviantart.com/?q=sonic%20base&order=9&offset=120#/d2syjey

Fifi's reaction to most problems in the world. Base from http://browse.deviantart.com/?qh=&section=&q=sonic+base+team#/d2yuj6h 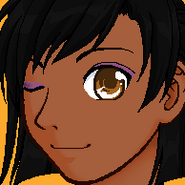 Fifi in anime. Made at http://foxrichards.deviantart.com/art/FaceMaker-52755515

Fif after her haircut (base used)

Fifi and her friends as humans (base used) 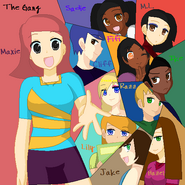 Fifi and Rocky with their extreme gear (bases used)

Fifi's previous design
Add a photo to this gallery

"Come on! Would you just try it on?" - When trying to make Razz wear a dress

"Any time; I'm ready!" - When Team Blast is achieved

"Ready to rumble, kiddo?" - Before Race/Battle 1

"That was fun! Wanna go another round?" - After Winning Race/Battle 1

"Cool! But next time, don't hold back." - After Winning Race/Battle 2

"Whatever. There's always next time." - After Losing Race/Battle 2

"Awesome! score one for us!" - After hitting a homerun

Retrieved from "https://sonicfanon.fandom.com/wiki/Fifi_the_Bear?oldid=1369181"
Community content is available under CC-BY-SA unless otherwise noted.