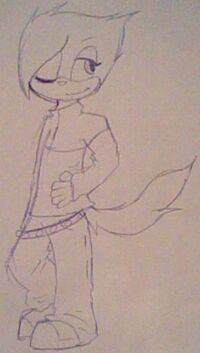 So is that your thought towards me..? Then I guess the world may not need you then~♫

Fiert is an anthrophormic Hyena Made by Mr.gameandfight. He is the Anti Version of Cervantes In The Hollow Valkeries Series

The Idea of Fiert was to practically be the form of his creator but was rejected due to the idea of making Fiert flamboyant and puzzling in personality. Fiert's Design in character was actually inspired by Ash Crimson from the KOF series made by SNK. Fiert's clothing was also inspired by a modern self-trademark attire that his creator always wears.

Making it to Mobius

Though Fiert has lived and experienced all important and crucial events to Cervantes but at negative approach, Fiert soon atuned to his own personality, attributes, and ambitions. This caused fiert to find any means necessary to reach the positive world to fully reside there for the rest of his life. He encountered others that attempted to make alliences from people such as payback fox, Scourge, and Kintobor to join him in reaching the positive world of mobius. However Fiert highly knew about their malevolence (With the exception of kintobor) and fooled them into helping creat a way to Mobius then destroy the passage there and was a huge success in doing so. As Fiert made it to Mobius, he started to look through all of it's inhabitants and enjoyed himself but noticed there were alot of malevolent people in Mobius just like in the negative dimension and soon decided to learn more combat skills to be better than his Positive Conterpart. He then took lessons from Another Negative Who Resides in Mobius and as through training, he was also taught to use a chaos ability to add more power to himself called "Chaos Extract".

After his harsh regimen training with Kikime' and Learning chaos extract, Fiert needed slight resources before he actually met Cervantes so he stumbled over to a house resided under the names "Lightnington & Mikage" and decided to reside under them. As Fiert met them, he got acceptance from both of them and got a second thought to use Chaos Extract. During the same night Fiert was invited in, he decided to try chaos extract onto Lightnington to see the outcome. In the end of the Chaos Extract move, Fiert gained the tiniest amount of electricity and vanished.

In the Aftermath of an undecisive battle from Speed, Fiert is informed that Chelsea is pregnant and that absorbing Chelsea power is slowly killing their child. As Fiert complies, he gives back the powers and promises that he will regain the energy after their baby is born. 5 months later the baby is born and being held in Chelsea's arms, Fiert easily manipulates her and absorbs all of the electric offense energy from her to give off no effect to Chelsea or a future baby's health.

Fiert's Attire colors are similar to Cervantes, yet he wears extremely different clothes from him. For His Upper Body, he wears a Dark Blue and black Sweater that is a size bigger than his body. As for his lower body he wears dark-ish grey Jeans the reach his size other than his sweater. As a bonus to his attire, He has Black Painted Finger-Nails.

Because of his vague looks, Fiert is Extremely haughty, prideful, Flamboyant, calm, and boastful. He seems confident in his abilities and but this makes him very modest (Possibly him having his abilities based around absorption). He is also very carefree knowing the facts in his past that Andrea's immense powers and abilities could've killed him if given the chance.

He is also shown to be easily annoyed when someone satires his personality and judges his sexual preferences even when they know he is dating a female. Fiert is also shown to be completely honest and loyal to people that he would share a very strong bond with (Andrea in particular). He also has an odd habit in stretching and sitting in weird positions such as cracking his joints while fully arching his back.

Fiert is a team player but also a trickster when he wants to be. an example would be absorbing Chelsea's lightning abilities when he wanted to other than the time he absorbed Nathan's Strength and physique as a need to protect Andrea. Also due to him being a very calm individual, he does not seem to subcome to "Face-Faults " like any other character yet he will often speak to most of his sentences ending in musical notes.

Fiert also has a habit of giving his aquaintances Nicknames. Such as Andrea being called "Mistress" or Navia being called "Navitti" to either annoy the person he's speaking to, or find a better way to remember them by if he forgets their names. He even shows a good measure of compassion, such as finding a cure for Alaina when she was under the plague or convincing Colina to be the adoptive daughter to Cervantes.

Electricity - Fiert has absored all the Electric Powers from Chelsea and made them into his own fighting style containing these abilites to make the following abilities.

Super Human Speeds - Using his electric powers, Fiert can dash and jump into the speed of light

Create Electricity - Fiert can be able to creat and manipulate electricity 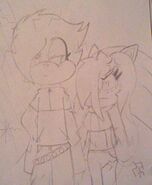 A Close Up of Fiert 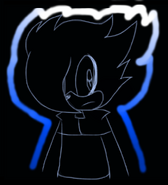 The Way By Egypt Central

Retrieved from "https://sonicfanon.fandom.com/wiki/Fiert_The_White_Hyena?oldid=1798063"
Community content is available under CC-BY-SA unless otherwise noted.