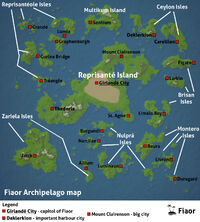 The Fiaor Archipelago was dictated under President J. C. Von Darlehen, but was freed by The Underground during the Fiaor Freedom War. Under the Archipelago Democracy Act, President Von Darlehen gave the task of governing the islands over to The Underground. Fiaor subsequently was rebuilt pretty much from scratch, a democracy was put in place and it's infrastructure, such as the FSR Fiaor State Railways lines were expanded from merely two to approximately 68. Subsequently, the transport company MINK bought out FSR as it was going bankrupt at the time, and renamed it MINK Fiaor. The official languages of the Fiaor Archipelago became English, Chiz and the native language of Carterlon.

Retrieved from "https://sonicfanon.fandom.com/wiki/Fiaor_Archipelago?oldid=1798177"
Community content is available under CC-BY-SA unless otherwise noted.