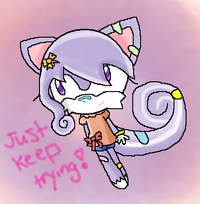 A cute skunk child who is very accident prone and can often be found covered head to toe in bandages!

Currently seven years old, Fern lives with her mother, "Rosebud" in an Apartment complex in Station Square. She is single, being very young and has yet to feel love towards anyone in a romantic sense. Much to her shock, as a teenager she is prone to falling in and out of love easily.

Fern is a neutral-good/hero character, given that she hasn't found so many abilities to call her own yet. So to her, it's more of a "hero in training" thing.

Fern likes to collect bandaids with neat designs or styles in general. As well as collect ribbons.

A cute skunk girl who is very accident prone. Because of this, she's usually sported from head to toe in bandages. She dislikes the scent skunks usually have so she is often seen to put on perfume or play in flower fields. But due to being hurt, her smell is very medicinal. She's used to it while everyone else isn't unfortunatly... She's very nice and friendly though, so once you get past that she's a cute friend to have.

Fern is a light lilac color, about the same shade of Blaze the Cat. She has big purple eyes and white skin. The skin inside her ears are light pink however. As a child, Fern has three big bangs, with one on the right side of her head that is shoulder length with a small wave, curling inward.

She wears a Copper colored blouse with ruffled lining and a red bow on the lower right. She wears dull, dark blue colored short-shorts and a yellow ribbon in her hair.

She has bandages above her nose, two on her left ear, two on her tail and one on each leg. She also wears a bracelet.

After time skipping, Fern's hair remains about the same but she has just four bangs with two smaller one's in the center and a single long one on the left of her face, while the one on right is much longer and curls up. Her hair also has gained a bit of length. Her hair is decorated with copper colored hair clips and a thin red ribbon with a big pink heart in the center.

She now wears an orange-copper tanktop with a frilled neck and lining, and a pair of bright blue shorts. She also has powder-blue kneesocks and peachy-copper flats. She wears a single blue bracelet, two bandages on her right leg, three on her tail, one on her right wrist (upper portion), still above her nose, and two on her right ear.

Retrieved from "https://sonicfanon.fandom.com/wiki/Fern_the_Skunk?oldid=1409481"
Community content is available under CC-BY-SA unless otherwise noted.