Feral Fox is a transformation undergone by Fox the Brave. It is his second Charizard-based form, the first being Chaos Fox, and is his second-most used form beyond Fire Fox. In this form, Fox becomes a big Mega Charizard X, but unlike Chaos Fox, where Fox's fierce attitude is tempered by Tai's calmer personality, this form heightens Fox's aggression. 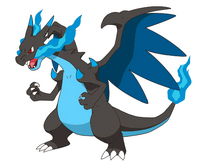 Feral Fox has the appearance of a typical Mega Charizard X, but with a notch in the right uppermost horn, symbolizing Fox's torn ear.

The War of Time(story): Fox first undergoes this form after Tai helps him come out of his death-like state after being effectively stabbed in the back by Mephiles after beating him as Fire Fox. Enraged, Fox transforms into Feral Fox for the first time and easily beats Mephiles.

Revenge of Enerjak: When he confronts Dark Enerjak over the theft of his son Braveheart's Core, Fox becomes Feral Fox in the beginning of the fight before becoming Chaos Fox.

The Lost Fox/Storm's Shadow: Finitevus finds a way to recreate his hex from the War of Time, this time to use it on Fox. After having the Storm Fighters' leader captured and brought to him, Finitevus antagonizes Fox into becoming Feral Fox, thus leading to him falling under the mad Echidna's control. After this, Feral Fox kidnapped Austin Smith, who had been spying on them, later killed Coal Wolf, and badly injured Austin during a battle when the young dog took a Thunder Punch meant for Splash the Greninja. Deeply angered by Fox's actions as a result of Finitevus' control, Splash underwent his Master Splash transformation for the first time and did battle with Feral Fox, tiring him out so that he could break free of Finitevus' control. Feral Fox then turned around and Thunder Punched Finitevus, knocking him away.

Austin's Terror: Feral Fox first appeared when he fought Dark Enerjak to defend the Base. When the fight was over, Fox reverted to normal.

Austin's Return: When Dark Enerjak returns in another attempt to destroy the Base and the Alliance, Fox is knocked into the main building. Austin drags him out, and after getting to his paws and transforms into Feral Fox to beat and defeat him once and for all.

Fox can use all of Charizard's learnable moves plus a few extras. His confirmed moves are Flamethrower, Fire Blast, Dragon Claw, and Thunder Punch.

Due to his heightened aggression, Feral Fox is susceptible to being controlled, and can tire out more easily since he focuses more on offense, preferring to go all out.

Retrieved from "https://sonicfanon.fandom.com/wiki/Feral_Fox?oldid=1800496"
Community content is available under CC-BY-SA unless otherwise noted.