Start a Wiki
This is an article about Felica, Goddess of Joy and Livelyhood, a character created by Jaredthefox92 on 05/31/2015. 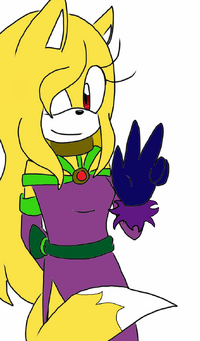 Felica is a reboot of Gicandice the cat and Candice the Cat In Jaredthefox92's new Sonic fanon continuity series, Flawed Deities. In her latest incarnation Felica is the feline goddess of joy, happiness, livelihood, and silliness. She still retains her former power of altering her own stature to become a strong and powerful giant(ess), but also she gains many a new deity ability as well. However she is also known to cause trouble with her clumsiness and lack of intelligence.

Felicia's appearance has been altered in terms of clothing and hairstyle from her previous incarnations, yet also possesses traits from both her predecessors. Felicia’s hair is more akin to Candice’s, yet her red eyes are more akin to Gicandice’s. Felicia has a unique outfit that incorporates color schemes from bother her previous forms as well. She is known to wear a variety of footwear such as sandals and ballet shoes.

Much of Gicandice's personality has spilled over into Felicia, as such they share some striking similarities. Felcia is happy go luck, perky, energetic, and a little scatter brained as her former self was. She is often seen prancing around and being merry, even when it causes problems for others. In a sense this makes Felica often viewed as an antagonist despite the best of her intentions.

Felica is believed to be one of the “New Gods” of Mobius and thus she has come about shortly after the first Mobian civilizations have arisen. As the Mobian species became organized and started to cooperate with one another their combined happiness and joy came together and manifested itself to create Felica. As the embodiment of all that is fun, silly, joyful, and playful Felica seeks to spread joy and happiness upon the mortals of Mobius. However, one of her more tragic flaws, her lack of intelligence and clumsiness often makes her do the exact opposite and wreak havoc and destruction.

AS being a goddess Felica shares many of the same supernatural powers as every other god In Flawed Deities. Not only is she immortal for instance, but she also possesses omni-sight, omni-hearing, and the ability to alter her own stature to become a mighty and powerful giant(ess), (very much like her predecessors before her) She also is able to effect other’s emotions around her giving them a strange sense of joyous bliss if Felica wills it.

Much like Gicandice and Candice before her it is Jaredthefox92’s hope that she will actually be used to bring joy and laughter to those who view her in real life, thus Felica is made to be viewed as a comic relief character. (It’s an in joke that she is supposed to make the viewer of her happy and entertained while she in story causes destruction and turmoil.)

As with her predecessor, Gicandice, Felica is known to not be the brightest god there is. She often sees the world in a warped since of innocence and thus is oblivious to her own problems she causes to mortals. Often she is seen as obliviously evil as this is intended for a dark humorous effect.

In comparison to other gods and goddesses in Flawed Deities, Felica is actually pretty weak. She doesn’t have any real offensive powers to combat gods such as Grief and therefore would more than likely have to resort to hand to hand combat. She must often have aid come to her if she hopes on defeating more aggressive and combat minded gods.

Retrieved from "https://sonicfanon.fandom.com/wiki/Felica,_Goddess_of_Joy_and_Livelyhood?oldid=1780384"
Community content is available under CC-BY-SA unless otherwise noted.