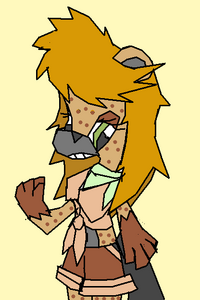 Felicia is a Spotted Hyena with a tan fur colring with brown spots and grey markings on her body.She has dirty blonde hair as well.She wears a mint green scarf,a light-ish tan t-shirt,browns khakis that are rolled up,and dark brown boots.

Felcia was born in Magharibi Village to a young couple.When she was young it was already decided by the Queen of the Spotted Hyenas(Who split up the kingdom into villages and towns) that when Felicia grew up she would lead the Maghribi Militia.She was trained by the former leader to use guns and daggers.Eventually at the age of 20 she finally became the leader of the militia.That's when she met her team mates Vincent,Tamara,and Sage.She also met Jade and Raven,two lioness who left their kingdom because they said it was lame.They usually come around the village to terrorize the people there.

Felcia takes great pride in the work she does.She can easily get angered by anyone who trashes the village and will personally beat them up.She has a strong hate for lions(Except Vincent and his sister) and can care less about relationships with others.Sometimes her pride gets the best her and often she gets an ego from her work.

Felicia and her team mates were made when the creator thought there wasn't enough "Hero" Hyenas.

Retrieved from "https://sonicfanon.fandom.com/wiki/Felcia_the_Spotted_Hyena?oldid=1798062"
Community content is available under CC-BY-SA unless otherwise noted.