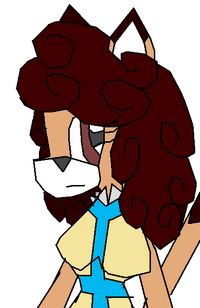 Fawks is a Mobian Abyssinian Cat with light brown fur with dark maroon markings and maroon hair.She wears a yellow dress with a blue cross on it and white frills.She also wears blue sneakers with white stockings.She wears white gloves on her hands.

Fawks,unlike her sister,started out nice and shy and grew violent with age.Also unlike her sister,she resents all of her family,except her sister.She shuts people out of her life and would rather socialize with Chao and Flickies than Overlanders and other Mobians,species which she hates.At times when she's not violent she can be pretty humorous and is willing to stand up for people,even though she's hates social interaction.She's mostly happy when she's in a forest or jungle of some sorts.

Fawks was the second born child in the family.At her young age she was quiet and shy,like her older sister at the time.She was dubbed Fawks the Kitty,because her personality was way different from her sisters and people often thought she was the Moebian or Anti version of Fox.When her younger brother was born she became a bit more violent.At this time her violent actions forced all her friends out of her life.After this happened she deterred herself from making friends with what she called 'bipeds' and instead interacted with Flicky and Chao.Though interacting with Chao and Flicky couldn't solve her problem.She met a Ghost Fox name G'hu who she would talk to most of the time and go to him when she had problems.Her younger brother was 4 at the time he started forcing her to do stuff for him.When her younger brother caused her older sister's arms to fail,Fawks went to her younger brother and kicked him in the jaw,shattering alot of his teeth.She was grounded for many months,in which she only spoke to G'hu and Fox,and her parents thought of sending her to military school.She resent her family for trying to do this,but the day before she would go to military school Fawks and Fox ran away from home.

The two would eventually meet a small group of other wanderers and they formed a team called,Team Fury.While being of the group and following them,she constanly searches each grave and library to see if G'hu is real or if he is not.

Fawks loves her older sister and is willing to hurt anyone who harms her.Though she hates technology,she actually likes anything her elder sister makes.Fawks as well tries to be less violent around Fox.

Despite G'hu being dead this hasn't stopped Fawks from interacting with him.She considers him her best friend and often goes to him when she have trouble with things.She developed a crush on him since he's the only boy she came in contacted with.

Though it is rare for Fawks to make social interactions with others,she seems to really like Pity.The two have a lot in common,such as there love/hate relationship with machinery,both of them diregarding authority,and their love of destroying things.Pity is the second person she Fawks goes to for advice.

Fawks does not know whether to consider Lex as a friend or not.Lex likes Fawks as a friend and often tries to get along with her.He doesn't like how animalistic Fawks can get when she is angry.Fawks on the other hand either is ok with Lex's  company or finds him annoying.

Fawks and Gustin rarely interact,despite being on the same team.Gustin is the only person she barely knows that she's ok with.

"I beat worthless bipeds fair and square!"-Fawks winning a race or battle

"I'll beat you next time,pleb!"-Fawks losing a race or battle

"Oh I love the forest,though I hate that I have to live in Exitium City...."-Fawks talking about her hate of urban areas

"You're not as bad as I first thought"-Fawks saying goodbye 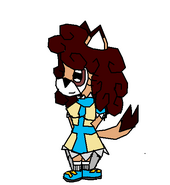 A chibi of Fawks

Fawks Redesign
Add a photo to this gallery

Retrieved from "https://sonicfanon.fandom.com/wiki/Fawks_the_Kitty?oldid=1555660"
Community content is available under CC-BY-SA unless otherwise noted.