Start a Wiki
Fawa is a 8 yr old flying fox who can control the power of Venom(nature and poison powers). He also hails from another planet, Fopland.

Here, he lands on the Planet Earth after his home planet, Fopland, being wiped out. Here, he also loses all his memeory, and meets up with a raccoon named Crystal. In his dreams, he finds bits of his memories, but he is a Chao in these dreams, caused by none other than Darkness, who also destroyed his homeland. After some exploring, he finds his sister, who also survived, and his memory, and he decides to stay on Earth.

He has nature and poison powers, usually combining the two to make a combo attack. He can also fly with his wings, since his tails are used sometimes for attacks. His tails bring out normal attacks though, and so he doesn't use them much.

He's usually very energetic, and can sometimes get ahead of himself. He's very curious to find out what's going on sometimes and acted very babyish when he lost his memory. However, as of this present moment, he's very calm and quiet. And he knows how to fight when neccessary.

Fawa when ready to fight 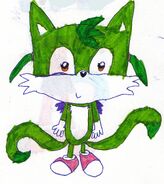 (Ignore the background thing)
Add a photo to this gallery
Retrieved from "https://sonicfanon.fandom.com/wiki/Fawa_the_Flying_Fox?oldid=1691419"
Community content is available under CC-BY-SA unless otherwise noted.