Start a Wiki
This is an article about Farine the Honeycake Kangaroo, a character created by Megaphantaze on 07/27/2014. 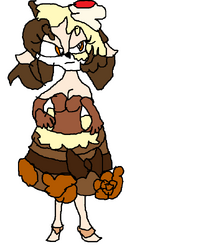 Farine is a skin colored kangaroo who has dark brown hair. The right side of the hair is cream-colored and has a cherry on it. Some of the cream is also on her white mouth.

Farine clothing includes brown dress and brown gloves. Under her waist, there's a big honey cake. It's brown and has dark chocolate cream around it. It has also chocolate flowers and creamy top.

Farine is individual, but sweet person, who has "buns in the oven"(Means that her life is going well). She has a candytooth and likes to eat chocolate bars and bubblegum. Because she is part of a cake, she can be also suspicious and collect many looks of those, who wants a bite of her cake body.

Farine is a daugther of the King Omar and Queen Marianne, rulers of the Magemake Land, which is known of it's sweets and snacks. Farine worked as a guardian of a dessert mountain known of it's cakes from the foreigns. She retired from her job and found a bakery shop at the Mobius. She now makes the town's best cakes.

Since Farine is cake, she can't stand heat, which will melt the cake part of her body. That's why she doesn't like any hot things in her bakery. Another weakness in the cake body is, that it's real and it can be eaten. Farine avoids candytooth having people for this reason. The cake part is however removable.

Farine made by AnnetheFox at DeviantArt 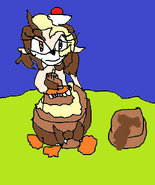 Farine with a cake 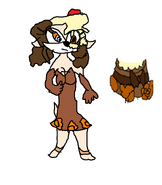 Farine without her cake part
Add a photo to this gallery
Retrieved from "https://sonicfanon.fandom.com/wiki/Farine_the_Honeycake_Kangaroo?oldid=1822772"
Community content is available under CC-BY-SA unless otherwise noted.