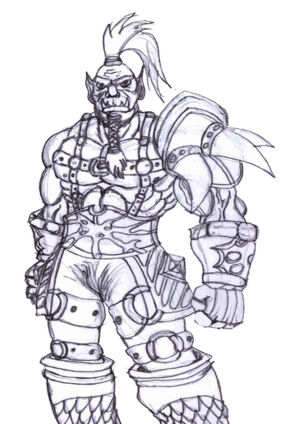 Farfig the Youngerererest, also known as Champion Farfig, Farfig of the Infinites, or Farfig ot the Frostfire, is a Dragonmaw Orc from the realm of Morganna. Farfig is a champion of his clan and, in pursuit of greater challenges, used an ancient Dark Portal to relocate to Mobius.

Farfig is an incredibly simple Orc considering his clan's reputation and his own birthright. His is on the borderline between moronic and uneducated, leaning towards the former. It is unknown as to why he is of very little intellect although it could be a side effect from being born from an Orc and Dragon, the latter being of the corrupt Netherwing Dragons who themselves are unsuccessful genetics from the Black Dragons.

Farfig's intellect is little enough that he cannot count to five, instead using One, Two, Many, Lots, Heaps, and "More Heaps" for any value greater than. Farfig has no concept of individual names, and so any creature or object that needs a "strong sounding name" is automatically given the name Farfig, as is how the Farfig lineage originally began, and how Farfig the Blackblade was given his name.

The Orc is considerably naive as well, not understanding undertones, sarcasm or even idle threats. In some cases even acts of violence against him do not take their toll on Farfig in terms of response simply because he can endure so much pain that he doesn't even realize people try to hurt him, such as shrugging off a two-handed mace attack by just dusting his chest off.

Regardless of his simplicity Farfig has random bouts of intelligence, cunning, and even overly emotional outbursts though these seem sporadic at best and no one has ever figured out how to inspire his greater self when needed.

Farfig was born in 1976 within the realm of Morganna, the demonic plane which is supposedly the judeo-Christian concept of "Hell" and the home world of demons who attempted to invade Mobius. Farfig was born into the Dragonmaw Clan, a clan of Orcs who revere and worship the demonic Netherwing Dragons, who were in turn born from the Black Dragons before becoming corrupted by the realm's demonic energies.

Farfig was born as an "experiment" by the devious Lady Netheria, a matriarch of the Netehrwing Dragons who wanted to breed the perfect warrior by mating with one of her follower Orcs. Instead of given birth to an entire clutch of eggs, she only birthed a single Orc baby who, to her disappointment, looked like any other Orc. In dismay she sent away her consort to raise the child, stressed that she could not achieve her goal.

However, as Farfig grew older, his body was maturing greater than any other Orc of his generation and those before him as well; by the age of 16 the child was taller than his elders as well as being more muscular, even when compared to trained Dragonmaw warriors. However, with his great physique it was well known that Farfig was not as mentally capable as the other Orcs, sometimes not being able to follow instructions. Despite this setback Netheria was pleased with the results.

Farfig began to undergo immense physical training to the point where he would not stop, going for hours, almost days on end, in the pits against target dummies of all shapes and sizes using only a crude hand axe. Netheria understood that not only did his size and physique improve but his stamina and constitution was unnatural, just how she liked it.

One of the veterans, Baragar, however, was in constant annoyance of Farfig's reputation and fame as being a hulk of a warrior. Baragar challenged Farfig to a Lok'Narosh, a fight to the death. Farfig accepted not knowing what a Lok'Narosh was and thought it only as a sparring match. The fight went as scheduled, with Farfig intercepting each of Baragar's attacks with a smile and laughter. Enraged, Baragar sliced farfig across the side leaving a deep wound. However, Farfig did not reoil or flinch from the attack, instead looking down and, with a strong right arm, cleaved his opponent in half wound his small hand axe. His victory earned the greatest of honor from his fellow tribesmen as well as from Netheria, who bestowed upon his Gladiator Raiment which was reserved for champions of the Dragonmaw, the last champion being his grandfather.

Farfig's powers are primarily down to his birth as a half Orc-Dragon although some of it extends to other sources, such as his training or his equipment.

Farfig is unnaturally tall and muscular for an Orc of any species on Morganna, and as such his strength is increased to monumental levels, such as lifting huge boulders, punching down trees, smashing stone with his fists, etc. His stamina has been augmented so much so that even bullet wounds, gashes, stabs etc. barely phase him despite him still feeling some of the pain.

Because of his lineage Farfig is able to manifest flames in whatever way he wishes, although this happens more often than not when he enrages, coating his body and weapon in powerful demonic green flames. The greater Farfig's rage is, the more intense these fires burn.

Farfig's weapon is his greatest asset of all, the Reaver of the Infinites. The axe-scythe was forged as Farfig's "Avatar"; a process in where a Dragonmaw Champion is forged his own weapon from a Netherwing Matriarch's demonic flames. Instead of using Netheria's Farfig used his own flames to forge his weapon. The axe-scythe is a large, dark iron shaft with half an infinity symbol fixed to the end, the bottom curve sharpened like an axe, where the point at the top curved round like a scythe. Reaver of the Infinites is said to be one of the most powerful of weapons in existence seeing as Farfig slew his mother with a single stroke of the great blade.

Retrieved from "https://sonicfanon.fandom.com/wiki/Farfig_the_Youngerererest?oldid=1384049"
Community content is available under CC-BY-SA unless otherwise noted.