Start a Wiki
Farfig the Blackblade 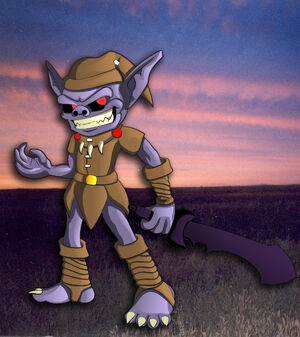 "What Farfig wants, Farfig steals."
Age
Unknown
Gender
Male
Species
Goblin
Appearance
Farfig is a rare kind of Goblin that deviates from the usual olive or green skin color, instead having a dull purple hue. His eyes are sunk deep and of black and red color. His teeth and nails are of a dull bleached color.
Attire
Farfig wears very basic clothing, consisting of a leather tunic and waist wrap, belt, and foot wraps. he has a single leather bracer upon his left wrist. A small hat sits upon his head with a single stitch in it. He also dons a necklace of gnoll teeth and of two sphere-cut rubies.
Height
3'06
Weight
44 lbs
Relatives
*Farfig the Youngerererest (Orc Companion)
Alignment
Lawful Evil
Skills/Abilities
* Quick reflexes
Ability type
Speed
Forms
N/A

Farfig the Blackblade, also known as Farfig the Smallest, is a Goblin Thief who served the majority of his time as a prisoner under Thunderspire Labyrinth. Farfig had no prior name to this, and was only given his name when a Half-Orc barbarian, Farfig the Youngerererest, freed him from his roaming captors and bestowed upon him the name. Sneaking, cunning, and only out for his own need and that of his savior, Farfig the Blackblade will trick anyone gullible and steal from anyone who's not cautious.

Farfig was a lone Goblin who was ousted by the rest of his band of raiders when he stole a sacred sword that belonged to the chief of their warband. The Black Blade was of unknown origin and power, but Farfig has said that it felt like ti called to him. He was chased out of the den and out of the countryside where they inhabited, stumbling upon the village of Whitehaven.

The village, knowing that all Goblins are evil, deceitful and untrustworthy raiders, chased him out of their village vorth towards the mountain ranges. Upon heading towards the mountains, Farfig attempted to make refuge within its caves, unbeknowing that it was actually the Thunderspite Labyrinth; an underground city home to many creatures and sentient life. Before long, the Goblin was captured by a wandering gang of mercenaries.

The mercenaries would use him as a powerful tool in order to make gold from the Thunderspite Tournaments held within the Seven-Pillared Halls. Because of the Black Blade and farfig's great abilities as a thief, he was able to at least top three all tournaments, making the gang enough gold that they were about to depart from the Thunderspire Labyrinth for good. However, not willing to let their tool go, they were to take them with him.

However, a lone half-orc barbarian, Farfig the Youngerererest, would encounter the gang upon his travels towards the Seven-Pillared Hall. Farfig, indifferent to the band assaulted them in great rage after they had provoked him in combat. The Goblin would be freed by the Orc after he would aid in killing his captors. Feeling free after so much time, the Goblin would vow allegiance to the barbarian, and inturn Farfig would share with the goblin his family name, the Goblin becoming Farfig the Blackblade.

Farfig is a sneaky, deceptive and untrustworthy creature. If he finds something that he likes, or something that he wants, he will constantly conceive ways to take it or them as his own, one way or another. As a professional thief he is able to take many things from many people without them even realising, even when they're next to him.

The Goblin also has his little cruel side as well. As a Goblin, he is not with reason to engage in combat with innocents, as well as what others would perceive his allies, especially if he is threatened or finds that he has no further need of them. Farfig is an aggressive and incredibly light-footed fighter, and will attack until he sees an opportunity to flee to regain his strength. However, when cornered, Farfig will fight to the death.

Farfig only shared loyalty with one person, being that of Farfig the Youngerererest. As his saviour from slavery, he maintains unwavered loyalty to him and will happily fight for him among other requests that befall his expertise.

Farfig is a powerful little Goblin thief more so than most people, including his captors and his companion Farfig, actually know or even would have guessed. A lot of his strengths come from doing menial tasks or orders that relate to his profession.

Retrieved from "https://sonicfanon.fandom.com/wiki/Farfig_the_Blackblade?oldid=1563064"
Community content is available under CC-BY-SA unless otherwise noted.