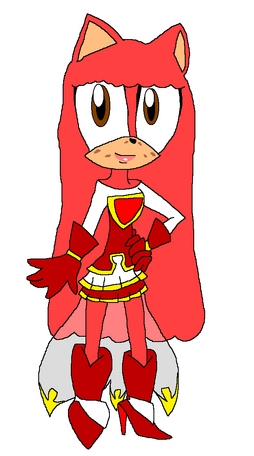 Farawila is a silly and cheerful girl who likes to entertain people with her (un)funny jokes, usually around strangers. She can also somewhat be seen as a comic relief and joker, often fooling around with Dr. Eggman which makes him angry. Despite her incompetent and bumbling behaviour, she is also a strawberry sweet character.

Most of her early history is unknown, even though she admitted that she was born and raised on Soudalia until there was massive civil war versus the South and was forced to get sent to Mobius by her mother.

Farawila possesses great Crystal Magic and has the ability to break buildings with her fist punch. She also has the ability to stop time, but doesn't do it often. She is good at wall-jumping, and even saved Sticks from Dr. Eggman's badniks.

Alternate version of Farawila.
Add a photo to this gallery
Retrieved from "https://sonicfanon.fandom.com/wiki/Farawila,_Princess_of_Soudalia?oldid=1798870"
Community content is available under CC-BY-SA unless otherwise noted.