Do you like games? I have a fun game! It's called 'Run For Your Life'!

Fantasm the Psychic (Genmu za Saikikku) was the "result" (in reality, she wasn't created, but found in an egg) of a secret, U.A.C.S.A-led operation known as Project: Apocalypse.

Fantasm is small; standing at 2 feet, she is smaller than most Mobians, and her shape somewhat resembles the Pokémon Mew. Her tail is very long, however, (6 feet), and always has six rings on it. These rings never touch her tail; they float. She can fling these rings at her foe and regenerate them easily (this is an attack she devised called PsyRing Strike). When she's not using the rings, they sink into her tail and become stripes.

She can alter her appearance inside of her "false worlds"; her favorite form to take is a tall, elegant anthropomorphic version of herself. Her voice will also change from that of a child to a more adult, female voice.

Fantasm was born to an ancient tribe of psychics. They had possessed incredible abilities. However, Fantasm was special. She had incredible power that even the elders feared. Deeming these powers a risk, they had her wear silver inhibitor rings. A young girl by the name of Mahala was chosen to be Fantasm's protector. She would watch over Fantasm like a younger sister, and make sure no harm came to her or to any others through Fantasm's powers. The two became very close, forming a sisterly bond. It wasn't long before an evil villain attempted to harness Fantasm's power and planned to freeze Fantasm's body so that she wouldn't be able to stop him. Mahala, however, sacrificed herself, and became frozen in Fantasm's stead. In a rage, Fantasm released almost all of her Inhibitor Rings and razed the village, before she looked over to a frozen Mahala. Even though Fantasm put the Inhibitor Rings back on, the damage had been done and their village had been ruined. Loathing herself for this, she again released all of her Inhibitor Rings. After nearly destroying the planet, Fantasm tired out, and fell into an ocean. She would be reborn 3,000 years later in the form of an egg.

3,000 years later, Phambeto discovered this egg. Sensing incredible power inside of the egg, he took it to the U.A.C.S.A headquarters. When it hatched into Fantasm, she was made the unwilling subject of Phambeto's dreams.

Before Fantasm could be the "Artificial Apocalypse", the full potential of her abilities had to be revealed. She was put through extensive testing, testing that involved not only chemicals and training, but Satanic ritual as well (or so it is believed). Despite the sheer amount of testing she underwent, it did not alter her appearance.

A Life of Hatred

Fantasm was treated poorly; whenever she failed a test, she was punished. Successfully completing a test yielded no reward. She was nourished upon fear, misery and anger, fueling her powers (and most certainly causing her to turn against Phambeto once she was "perfected").

When Fantasm was finally perfected (in 1995), Phambeto had no idea the level of hell he would unleash upon himself. She certainly created a miniature apocalypse within the confines of the U.A.C.S.A headquarters, killing over 95% of the soldiers and scientists. The base was left in ruins.

Later, G.U.N came and investigated the source of the destruction. Finding Fantasm (who was exhausted from the fighting), they were unsure what to do with her, so they captured her. She was brought to their base, where G.U.N soldiers studied and ran tests on her (although they did not abuse her), trying to figure out what she was. She still had the mind of a child, and thus she was afraid...but also angry.

After recovering her strength, she attacked G.U.N as well, so they were forced to seal her within a special containment pod. They later hid her within the ruins of the old U.A.C.S.A base.

* = Last number is the stat for Alpha form.

Fantasm was 'created' as the "Ultimate Kinetic Weapon". She is not only an Omnikinetic, but an extremely powerful one at that. Due to her Omnikinesis, she is capable of using practically every Advanced Combination (I.E Stratos, Nitrogen, Nimbus, etc.) known.

Fantasm wears six Inhibitor Rings on her body (one on each ankle, one as a belt, one on each forearm, and one around her neck). If any of these are removed, more of her power is unleashed. If all of them are removed, she would have the strength to destroy an entire planet within the time span of five days.

Her highly developed psychic abilities allow her to create "false worlds", in which she actually creates an environment that she can manipulate and shape to her will. The old U.A.C.S.A base is actually one of her "false worlds" that she managed to create while still sealed within her pod. The worlds are not natural, but they can physically affect people. She can also create creatures in the same manner as the false worlds.

Whenever any of her Inhibitor Braces are removed, the sudden surge of power released into her body will temporarily "paralyze" her, and she must wait an hour for her powers to stabilize; if she doesn't, the results could be dangerous to her, even fatal. Her regular form also has subpar defenses, essentially making her a glass cannon.

As shown in the "Project Apocalypse" RP, when she (in Alpha Form) is successfully defeated by Mel the Hedgehog, the sudden and drastic loss of all that power leaves her terribly weakened. She also takes much more damage from Dark-aligned attacks than attacks of any other element; this is actually meant to mimic the fact that Psychic-type Pokémon are weak to Dark-type attacks, and that Fantasm is called a "Psychic".

Her inability to negotiate and get along with others can also be considered a weakness.

This form is triggered by the removal of the Inhibitor Braces on her ankles, thus releasing more of her energy and powers.

Next, the Inhibitor Braces that she wears as a belt is removed.

In this stage, the Inhibitor Braces on her wrists are removed, leaving only the band on her neck.

All of the Inhibitor Braces have been removed, unleashing her full, apocalyptic potential. In Alpha stage, she has the strength to destroy a planet in the time-span of only 2 days. She transforms into a dragon-like creature.

Fantasm's personality is somewhat different; although she displays the personality of a little girl, she is known to be cruel. She loves to torment people, trapping them within one of her "false worlds" and watching them suffer. She takes failure very poorly. Having never experienced kindness, she believes that such emotions are meaningless.

Eventually, after warming up to Mel, she became quite a bit nicer, especially towards him. She is now more laid-back and calm as well. However, her relation towards Statyx have improved by only a smaller degree.

"Hmph! You attempt to sway me with your 'flattering' words?!" 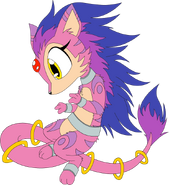 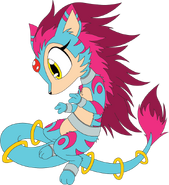 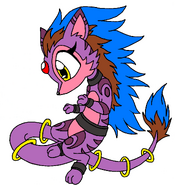 Colors suggested by Kagimizu
Add a photo to this gallery
Retrieved from "https://sonicfanon.fandom.com/wiki/Fantasm_the_Psychic?oldid=1558784"
Community content is available under CC-BY-SA unless otherwise noted.