Not to be confused with the Sonic the Hedgehog character Fang the Sniper.

Fang the Saber is a character appearing in The Legend of Fox the Brave. He is an anthropomorphic saber-tooth tiger(referred to as sabers) from the northern tundra who left his Pack under unknown circumstances and has lived with the Storm Fighters since. 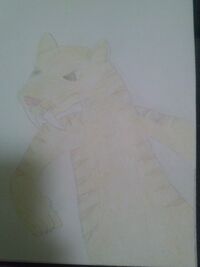 Fang is a stubborn and fierce person, and fiercely loyal to the Storm Fighters. He is also shown to dislike people who sneak around to cause trouble, as he spoke with Markus about hating people like Infinite.

Before the Series: While never mentioned, Fang was born in the Northern Tundra as part of the Saber Pack, a subgroup of the Tiger Tribe. Fang and his younger brother Stubbs were the sons of the Pack leader and his mate. At an unknown point in time, Fang's bitter enemy Elore caused an avalanche that drove the Pack from their home and separating both Fang and Stubbs from their Pack and each other. Fang traveled south to find the mysterious Mobian heroes he heard about, while Stubbs headed for Hang Castle-where he would live in peace until his death. Some time between the end of the Battle of Angel Island and Finitevus' imprisonment in the Storm's War chapter Warning from an Imprisoned Enemy, Fang joined the Storm Fighters.

Storm's War: Fang made a minor appearance in the chapter Warning from an Imprisoned Enemy. He and Cori walk into the cell block in which Finitevus is being held to relieve Austin and Storm-who had previously relieved Roy the Fox and Kaendan the Quilava-of their guard duty. When Finitevus begins to taunt Storm and Austin with future trouble, Fang tenses and begins growling alongside Cori.

Hunt for a Storm Fighter: Fang appears in the chapter Pyro's Return, questioning Finitevus' choice to go after Austin, wondering why. He tips his head, and it's noted to look a little funny that a huge saber had its head tipped to the side, but Austin finds no humor in the sight, having been scared out of his wits.

Like all sabers, Fang has incredible physical strength and high endurance and stamina, likely stemming from his huge frame and very muscular body.

Fang has never been seen in combat, so his weaknesses are unknown. It's possible though, that slimmer and more agile opponents-like Fox-can easily slip past him and use his weight against him.

Retrieved from "https://sonicfanon.fandom.com/wiki/Fang_the_Saber?oldid=1845630"
Community content is available under CC-BY-SA unless otherwise noted.