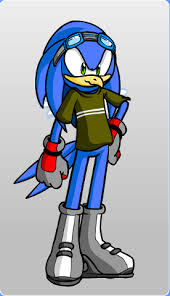 Basic Info
Name
Falco the Eagle
Full Name
Falco
Age
21
Gender
Male
Species
Eagle
Alignment
Neutral
Relationship Status
Single (for now)
Voiced By
Me
Appearance
Color
Blue
Description
A blue eagle who wears a green t-shirt. He has goggles which he wears for when he surfs.
Biographical Info
Birthplace
Unknown Awoke at age 7 in an alleyway with no memories.
Current Residence
A house with a laboratory in the basement.
Relatives
Thalia the Eagle (sister)

Falco the Eagle is a character who appears regularly in the SFW world. He is an intelligent scientist, and a good fighter. He has a murky past that leaves him socially inept and a bit unsure of himself. This encourages him to essentially devote his life to gaining power, craving what he was thoroughly deprived of as a child.

Falco's history is largely a mystery. He woke at the age of nine in an alleyway with a gun, a Gameboy, and a GPS. With the Gameboy was a copy of Starfox (which encouraged him to don the name Falco). He stepped out of the alleyway with no memories, and decided to try and create a life for himself. He currently lives in a makeshift lab he built for himself underground, raising funds by stealing and fulfilling bounties. From there, the story can all be found in Roleplays.

Falco can fly. He has an astonishing IQ, which he is happy to brag about, which means that he has many gadgets and weapons for use in different situations. His main gadget is the goggles that he always wears, which give him night-vision, x-ray vision and a couple of other tricks. He has no actual powers, and instead uses a suit that provides him with a variety of abilities. These are: Fire, Freeze, Levitate, Lightning, Sink, Cyclone, Shield, Beam, and Fusion.

Freeze: Blasts of energised ice that coat his targets in frozen ice.

Levitate: Suspends gravity below his enemies, causing them to hover.

Sink: A hole opens in the ground that Falco flies into. Behind him the hole closes up. As he flies underground, a small tunnel is generated in front of him and closes behind him. He can re-emerge at any time.

Cyclone: Fires a large wind attack that knocks enemies off of their feet. Feels a like a super punch.

Beam: A beam of concentrated energy and can have a number of laser-y effects.

Fusion: A combination of two other attacks. Falco says them before he says Fusion to specify.

Falco is brave, but is afraid of several things, including ghosts after the events of Black Armageddon, but he is very impulsive, which is shown many times throughout his adventures. He can appear to be very fierce sometimes, and often loses his temper while interrogating foes or when being told what to do. He has no trouble with being a traitor, as he has betrayed many friends and allies in order to get to his goals. His life goal is to his main weakness before one of his enemies exploits it. He also has a high level of intelligence, but this is mostly a sheltered intelligence due to his history. He is entirely socially inept and can be described as a megalomaniac.

Boombomb the Hedgehog: Boombomb is one of Falco's closest friends and allies, even if they do fight constantly. Falco often taunts Boom on being a corporate lickass, because of his job in the CIA, and now in the military. Even still, the two are close friends and have fought side by side on numerous situations.

Target the Eagle: Target the Eagle was one of Falco's friends, but recently told him that she had a crush on him, and he realised that he liked her too. In their first appearance together, Falco was under Eggman's control and tried to kill her, but they became great friends. This came to an end after having two children and being together for six years, when Target dumped him, believing him to be cheating on her. He went into a state of depression after this and became an alcoholic. Over time he recovered, and now has decided to remain single for a while.

Blue the Kirby: Blue is Falco's pet and eternal companion. He is two months old and not very intelligent, but has all the powers of a Kirby and many more, which Falco finds 'really cool'.

Shine the Hedgehog: Falco first encountered Shine during an attack on Eggman's base during Memory Crisisand they became good friends and allies after being abandoned by everyone else. They were the first heroes to encounter Lightning after his 'incindent' and they managed to chase him off. They are still allies in their quest to save Lightning.

Endac Dragonbane: Falco and Endac first met while searching for the Forbidden Secrets and were suspicious of each other at first,, but ended up becoming good allies after being separated from the rest of the group.

Jesse the Echidna: Falco and Jesse are good friends and have been on several adventures like the search for the Fobidden Secrets, Lightning's memory crisis incident and the battle against Eggman's army of eslaved heroes.

JT the Androhog: When Falco first encountered Jt (again during Memory Crisis) He was suffering from minor memory loss and called him PJ. Since then, they constantly row and can be considered rivals, however they have teamed up occasionally. Unknown by most people, Falco was actually key to JT's creation, which means the two share a bond that they refuse to even acknowledge.

Falco is tall, with blue fur and a grey stomach. He has green eyes and wears nothing but a green t-shirt and his special goggles. He is thin and has wings that are small enough to be concealed when necessary, but are also large enough to hold up his weight and allow him to fly. He is also almost always seen wearing a camaflouge green backpack, which contains a parachute (in case one of his wings are injured), a GPS and some snacks, although it has been known to hold other items as well, for exampe, on one occassion a smoke bomb.

Falco has had many adventures, but these are some of his most notable ones.

The Forbidden Secrets Hunt - Falco teamed up with a large group of heroes like Endac Dragonbane, Alasdair the Lionolf, Jesse the Echidna and many others. He had a major role in the hunt and the quest is still on.

Lightning's Memory Crisis - Falco helped Lightning attack Eggman, but came out with his memories in pieces. And even though he could remember almost nothing, he was able to team up with Shine the Hedgehog and continue searching for Lightning even now.

Control - During Control, Falco featured as the main antagonist, tormenting the heroes after being corrupted by power and a device of unknown origins. A more sadistic side was shown to Falco at this point.

Dawn of the Darkness - During this Falco was one of Fleetway Flame's minions due to a power craze. With time he calmed down, losing the special powers bestowed upon him when he did so.

Retrieved from "https://sonicfanon.fandom.com/wiki/Falco_the_Eagle?oldid=1577797"
Community content is available under CC-BY-SA unless otherwise noted.