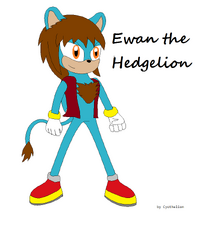 Ewan the Hedgelion is the son of Cyo the Lion and Bonnie the Hedgehog and grandson to Ayah the Lioness and Umeme the Lion. He makes his debut in the one shot story called Cyo and Bonnie's son by ScottishArtGuy.

He looks like a skyblue mobian lion but has two hedgehog spikes on his back to show he is part hedgehog.

He wears yellow and red shoes and gloves with golden rings.

As of being a hybrid of lion and hedgehog, he inherit both abilites from his parents, including:

He has been trained in combat by both his parents, Sonic and even by Rosie the Echidna at some point. His grandfather Umeme even taught him how to throw a spear. 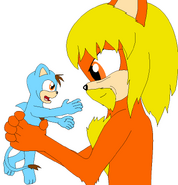 Ewan being picked up by his grandfather Umeme. 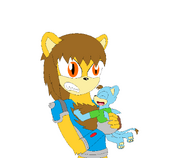 Ewan with his father Cyo.

Ewan getting fed by his grandma.
Add a photo to this gallery
Retrieved from "https://sonicfanon.fandom.com/wiki/Ewan_the_Hedgelion?oldid=1835398"
Community content is available under CC-BY-SA unless otherwise noted.