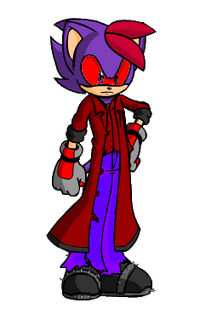 Evil Slovaken-Lians The Hedgehog 邪悪なスロバケン-リアンズザヘッジホッグ) (Jaakuna surobaken - rianzuzahejjihoggu) Evil Slovaken-Lian is a Slovak supervillain, the reborn force of KSI red hedgehogs and purple are alive, and then it is the enemy of the evil Slovaken-Lian who turn back to Eggman's empire and had to get alive and then maybe everything.

Made by Fan-Made with Male Furry Doll Maker by geN8hedgehog

Evil Slovaken-Lians and his friends Eggman,Scitanic and many all just evil plans and bunch and enemy Team Heroes and Good's, Team Sonic & Heroiclovakia.

In 2023 he experimented with attempts by other newcomers, and I hope it happened sometime broke him and in 2025 he built a robo-droid made by Eggman And also a television screen like Skype and Messenger and so on, and died my KSI power in 2028 and left to the portal to the world of Sonic Hedgehog, and then it's the Evil Slovaken-Lians who turn back to Eggman's realm and had to get alive, and then maybe everything.

When the Slovaken focuses his Healing Power on a teammate, they will gradually regain health Rings.

When the Slovaken focuses his Weapons Wispons Power on a teammate, they will gradually regain Killing Robots and Enemies Team Sonic, Team Slovakiaman & Team Heroiclovakia.

Retrieved from "https://sonicfanon.fandom.com/wiki/Evil_Slovaken-Lians_the_Hedgehog?oldid=1869626"
Community content is available under CC-BY-SA unless otherwise noted.