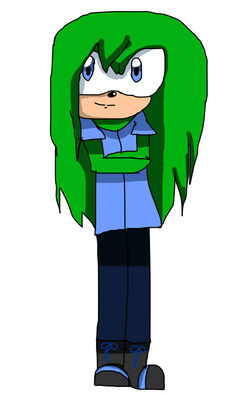 Evergreen the Echidna was a character created by Darkest Shadow. He was just an ordinary citizen who came from Beach Cove City who just moved away to Sorrento Town. A year in living there, he was shot twice, one in the leg in one in the forehead. The killer today is still a mystery and the FBI is still trying to find the corporate.

Not that much is known about his early life. He was just a normal average citizen.

When he was around 5 and a half years old, he discovered his psychokinesis powers. He started to become very good at this power.

During his years of elementary school. He made many friends. However, lots of people started to make fun of him for his personality.He got bullied by other people and his friends were too scared to stand up.

Later on, in his years of Middle School, he learned how to make extremely realistic illusions to fool people. He also went to a skateboard clinic to learn how to ride one.

A year later, a girl named Candlelight the Echidna had a crush on him. She asked him out, and then they were dating. Also, his skateboarding skills were much better.

The best way to describe Evergreen is relaxed. His relaxation is so odd, that when he is sleeping, an earthquake couldn't even wake him up.

However, when he is up. He is always prepared to fight evil. His additude may be polite, but his punches and kicks are extremely powerful. You better watch out for him!

Evergreen is alsokind hearted and modest. His modesty makes him a good opponent to face against. Sometimes, he gets picked on for this, even though it is very good of him.

Evergreen also knows when to say no. He use his free will very wisely. Evergreen is rarely ever fooled, which makes him a good body guard for his friends.

When Evergreen is mad, however, it is very bad. He's rarely ever angry.

Evergreen is also quite critical. He somteimes gives a bit of advice to strong people as a good job or improvement.

Evergreen is a green echidna. He has green accessories on his echida spikes. His spikes are soft and look much more like hair. He has sky blue eyes and a peach colored muzzle.

Evergreen wears a light blue polo shirt. Unlike most of the characters, Evergreen doesn't wear a collar. His gloves are white with a dark blue strip going down the sock like handcuffs. Also, he wears dark blue somewhat baggy jeans. Grey shoes with hidden a light blue strap complete his full attire.

Evergreen isn't bad at skateboarding. He went to a clinic to learn it in Middle School, and now he is very good at it along with his friends.

Evergreen is also a hockey fan. He plays street hockey with Monica sometimes. His skills aren't as good as Monica's but they are very good. He sometimes trains for it by warming up so he could beat Monica.

Evergreen also plays baseball. His skills are better than  most characters in this event.

Evergreen also likes to do many stretches and warm ups. His pull ups, push ups, sit ups and many other of his stretches are pretty good.

Evergreen doesn't have an actually fighting style. His kicks and punches, however, are indeed very strong. With his hockey warmups, he is much more powerful.

Evergreen learned the elemental power of psychokinetics/telekinetics in Kindergarten. His skills were superior and mastered the art of tekenietics. He used to use it to fight his opponent. He didn't rely on it very heavily though.

Evergreen also knew how to create realistic illusions. He learned it in his first year of middle school. Now his powers got him into a magi competition and almost everyone is fooled. He didn't mean it to prank people.

Candlelight the Echidna: Evergreen and Candlelight were dating. They usually hang out when they're free. Usually Evergreen takes Candlelight out on dates. She enjoys his company, and both feel as if they were watching fireworks when they kiss. They broke up when he moved, since long distance relationships didn't work and Evergreen ignored her begging to stay. When Evergreen was shot, Candlelight visited his grave a year later, putting flowers down, only for them to be kicked. It was revealed that he was the one who pushed her father off of the balcony, and suddenly most of her remorse faded away.

David the HedgeFox: David and Evergreen were pretty great friends. They usually hung out and skateboard together. Except Evergreen, didn't rap, unlike David's other friends.

Monica the Fox: Monica and Evergreen were good friends. They usually liked to play hockey together. however, usually Monica ended up as the winner, but sometimes, Evergreen would've won.

Cole the Echidna: Evergreen and Cole were also pretty good friends. They interact a lot and hang out when they are free. Usually, Evergreen watches Cole's Swag Fests.

Danny the Hedgehog: Danny and Evergreen are also pretty good friends. They interact a lot. Evergreen usually likes to see Danny rap in one of the Swag Fests.

Sebastian the Fox Hybrid: Sebastian and Evergreen were yet also pretty good friends. They see each other many times. Evergreen could always foresee Sebastian losing in an arm wrestling competition.

Candace the HedgeFox: Candace and Evergreen are great friends. They don't see each other a lot, unless she is with David. Both like to see the Swag Fests on Friday.
Retrieved from "https://sonicfanon.fandom.com/wiki/Evergreen_the_Echidna?oldid=1710687"
Community content is available under CC-BY-SA unless otherwise noted.