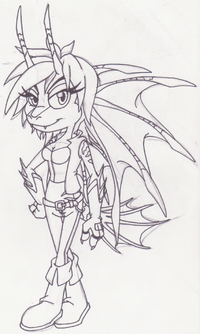 A loud, boisterous and flirty woman with a sadistic streak, Evaline the Lionfish (pronounced "EE-vah-LEEN") is a member of the Fleet of the Black Abyss and the captain of one of its ships, christened the Hookmaiden.

A fairly athletic and somewhat curvy lionfish who stands slightly taller than the average Mobian, Evaline has a rather short, somewhat pointed snout, a medium-length tail, and a myriad of elegant fins decorating her body, all of which are highly venomous to the touch; she has two fairly long ones on the sides of her head, a medium-sized one running down her back, and short ones on her forearms. She also has two long, horn-like fins on her head, which are also venomous.

Her scales are primarily flame in color, decorated by wavy white stripes; her muzzle, chest, and stomach are white as well. The outer edges of her fins transition into a dark red color, marked by sparser, wider white stripes. Her hair, which is shoulder-length and rather messy, is black in color, and her eyes are malachite in color.

Her outfit is fairly simple, consisting of a black vest over a carmine tube top, black shorts, and carmine boots. She also has black, elbow-length gloves, with slits in the sides to make room for the fins on her forearms.

Evaline's brashness is easily backed up by her formidable combative prowess. Skilled in both hand-to-hand combat and in marksmanship, she can reliably fight up close and from afar, although she generally prefers to use her primary weapon, a bladed hook at the end of a chain, to bring her foes to her; it can also be used to hinder their movement if it wraps around them. Her other weapon is a flintlock pistol, which she saves for when she can't get to her enemy.

As a lionfish, her elegant fins are actually highly venomous, with the venom being located on the spiny parts of her fins; this makes her a massive threat to anyone melee fighter who's not immune to poison, as even a slight nick from her fins can poison her foes. In fact, she actively attempts to use the ones on her forearms while in a fight.

Evaline is an adept hydrokinetic, and is also capable of manipulating the advanced element of Acid, which is an elemental combination between Water and Poison. She primarily uses mid-tier techniques of the Water Element, such as Aqua Jet, Bubblebeam and Aqua Slash, as well as various Acid-element techniques.

Evaline is resistant to the Elements of Water, Fire and Ice, and she also has a natural resistance to poisons. Her naturally venomous spines make her dangerous in close-quarters combat, especially against foes who need to make physical contact in a fight.

Evaline is weak to the Elements of Nature and Electricity. Her defenses are subpar, forcing her to rely on her agility and ranged attacks to survive; however, she mitigates this somewhat by being dangerous to melee-exclusive fighters.

Flashy, brash and boisterous, Evaline seems to crave action, and can't stand having nothing to do. She loves a good fight; the more challenging, the better, and she has little respect for anyone who falls too easily to her in combat.

She has a bit of a sadistic streak that tends to show more strongly when she's fighting; she loves to toy with her opponents, and often tried to drag out fights for this very reason. However, the longer they manage to last against her, the more respect she'll have for them.

Surprisingly, she's relatively slow to anger, but when pressed to her very limits, she becomes downright ferocious, and her sadism grows to absolutely bloodthirsty levels.

"You can look, but be careful not to touch if you value your life~"
—-

Retrieved from "https://sonicfanon.fandom.com/wiki/Evaline_the_Lionfish?oldid=1754738"
Community content is available under CC-BY-SA unless otherwise noted.