Espio is a purple/fuschia chameleon who is also from the canon series. He is currently a member of the Chaotix Detective Agency on Vector's branch, and uses them to put his training to good use. In this universe, he is the twin brother of Uno the Chameleon. 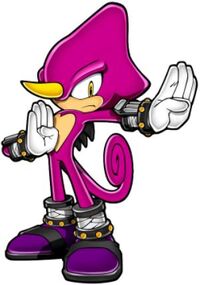 Angel the Bat
Dislikes
His Enemies

When promises are broken

Espio, along with his brother, Uno were born to two unknown chameleons (It should be noted that these were not their names at the time, but it is currently unknown what their birth names were.). They also had an older sister, but it is unknown what her name was. They were born into a ninja clan known as the Shinobi. However, there was an incident that had happened that had caused most of the Shinobi Clan to go missing, probably even killing most of its population, though it is currently unknown what happened.

Espio first appears in the second part of Chapter 1 in Charmy's flashback. He, along with the rest of the Chaotix are in Dylan's office for a brief yet important meeting. After Uno helps Dylan lift a small yet heavy safe from the floorboards, Charmy pretends not to know what it is, so Espio explains to him it is a safe, with a somewhat annoyed tone in his voice. After Charmy annoys everyone by singing the word "safe" over and over again in an unplanned tune, Dylan tells him to go sit by Espio. When the meeting ends, Dylan asks them if they understand everything he just said, and they nod to show their understanding.

He makes his first formal appearance in the first part of Chapter 3, when he, along with Vector are arriving at the mansion of Alta Hayes, owner of the Hayes graveyard (formerly known as the Jansons Graveyard), called there by officer Jerome Bee, who explains what they need to do when Hayes believes her house is haunted. Vector gets into an argument with Jerome when he finds that Charmy is not with them, presumably "wandering the streets", Espio soon breaks this up, reminding them this is not to the time to be unprofessional.

While Vector and Espio are searching the foyer for anything suspicious that may have to do with the "haunting" , he tells Espio he thinks Jerome may be too protective of Charmy, even though it is likely he is just trying to be a good guardian, however, Espio ignores him the whole time. When he reveals this, he tells Vector to take that as "payback" for not listening to the meeting the week before. The two then decide to split up and look for clues around the mansion.

The second part of chapter 3 is taken from Espio's POV, and it is mentioned that he had used his ninja speed to check three rooms, but found nothing. He checks the doors in the hallway, but finds they are all locked. He checks his hammerspace inventory to look for a paperclip to pick the locks, and finds a post-it note reminding him not to forget the paperclip. He uses the marker to bold in the words to make sure he does not forget. He reaches the end of the hallway, and finds a cord that he can pull on, which reveals a set of stairs that go up into the attic.

When Espio gets up into the attic, he hears a faint banging noise, possibly meaning there was something in the attic that was causing Ms. Hayes to worry, and decides to look for where it is coming from. After searching for a short while, however, he does not find anything. He hears a crashing sound, and takes a flashlight out from hammerspace to see what it was, soon to have Knuckles sneak up on him, startling him into falling on a pile of old antiques.

Knuckles helps Espio up from the pile, and explains he is here because he senses a Chaos Emerald is somewhere inside the mansion, using the Dark Blue Chaos Emerald as a "metal detector". Espio soon finds the source of the banging noise, coming from an old dresser near the back of the attic. Opening it, he finds three baby chao, one black, one gray, and one white. He and Knuckles coax them to come out of the drawer. Espio concludes that the mystery was just three trapped baby chao, though he is unsure where their mother is. He and Knuckles agree it is time to go back downstairs to report their findings.

Once downstairs, Vector is seen coming up from the basement, covered in spider webs, and slightly asks Ms. Hayes if she considered hiring an exterminator for all the spiders, and she tells him she intended to get around to it. Charmy teases Vector about being afraid of spiders, and raising his voice, tells him he is not afraid of them, he just hates being covered in spider webs. Espio requests that Vector lower his voice for the chaos' sake. He and Knuckles explain what happened in the attic, and Ms. Hayes comments she had "made such a fuss for nothing". Espio soon learns that the three chao he found have imprinted on him, and he tries to get them to stop following him, without much prevail. He ends up on the ground, when the three chao tackled him. Charmy pleads with Vector to let them keep them, and Vector agrees, but only until their real mother is found. Espio sighs, silently remarking that he is going to "have some long days for a while."

So far, there seems to be no significant change in his personality from his canon counterpart.

However, he does seem to have a slightly gentler side, shown once in Chapter 3 of Sonic Fanfiction, when he is coaxing the chao to come out of the drawer, promising them he will not hurt them.

Espio has the ability to walk up walls as if he were walking on the floor. However, this ability has not yet been demonstrated.

He can extend his tounge at opponents as a attack. He can also use it to reach various objects when needed. (For example, if he were locked in a cell, and a key was nearby, he would get the key with his tounge)

Espio is well-trained in the ways of ninjitsu, one of his most well-known skills.

He can preform Leaf Swirl, but this attack is rarely used.

He can change his skin to match the enviroment, making him invisible.

It is mentioned in Sonic Fanfiction that he has Ninja Speed, allowing him to get things done quickly. However, it may not be as fast as Sonic or Shadow.

He seems to have night vision, due to his ninja training.

Retrieved from "https://sonicfanon.fandom.com/wiki/Espio_the_Chameleon_(IncaIceBunny%27s_Universe)?oldid=1838128"
Community content is available under CC-BY-SA unless otherwise noted.