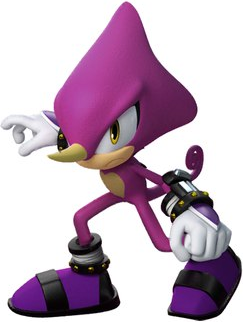 Espio the Chameleon is a character that appears in the Marshalia13 Universe. He is an mobian chameleon, ninja, and member of the Chaotix Detective Agency. There, he works together with Vector the Crocodile and Charmy Bee to solve whatever cases they are given, where he puts his skills to good use. Espio is a calm, soft-spoken, serious, and disciplined person whose wariness and soulful character makes him a vital member of his team, and balances out the foolishness of his friends.

Espio is a bright purple chameleon with a yellow horn on his head, golden eyes and a ridge of three black scales down his spine and a coiled tail. He wears dark purple and black shoes with elaborate cuffs, white gloves with a purple back, and studded bands around his wrists and ankles.

Espio and his teammates Vector the Crocodile and Charmy Bee, first made the acquaintance of Knuckles the Echidna when they teamed up with him, Mighty the Armadillo, and the robots Heavy and Bomb to oppose Dr. Eggman. At some point, they also interacted with Mighty's friend Ray, though he and Mighty adventured apart from the detective trio. They were also one of four teams who joined forces to defend Sonic's World from the threat of Metal Overlord, alongside Team Sonic, Team Rose, and Team Dark. Unlike the other three groups, the Chaotix took on the monstrous robot having been hired to do so; their employer was eventually revealed to be a deposed Dr. Eggman.

Espio would be caught up in the Black Arms' invasion upon the world as well, which saw him boarding the Space Colony ARK to have a film featuring a sane Gerald Robotnik activated, giving Shadow the inspiration needed to overcome Black Doom. Later, Espio was sent on a mission by Vector that involved him meeting Silver the Hedgehog, as well as battling the likes of Dr. Eggman Nega and the Ifrit. Espio and his teammates would also be among the friends of Sonic's that were kidnapped by the Time Eater, though he and the others were eventually rescued by the hedgehog and his younger self

A straight-laced detective, Espio is serious, practical, intelligent and wise. He has a militaristic discipline despite being quiet and laid-back. Espio is additionally portrayed as being stubborn, opinionated and self-obsessed. Despite this, he has an excellent drive to all that he does and flourishes off of peril, getting himself into threatening situations to flex and polish his ninja skills, and, due to his extensive training, he can confront these troubles head-on unconcerned by danger.

Espio values his freedom more than anything else. This is due to his reserved demeanor, which hides a burning sense of justice and a refusal to let evil have its way. As such, Espio gives the impression of a rather ruthless demeanor when facing villains.

Due to being a Chameleon, Espio is capable of blending into his environment and clinging to walls. He is also a trained ninja and skillful in fights. Additionally, he is proficient enough with technology to be able to hack into computers.

As a ninja Espio employs ninja-based weaponry, such as kunai and shuriken stars. He uses his shuriken stars as a long-range offensive by throwing them at opponents and can do so in rapid succession. By attaching a rope on his kunai, he can also use as a grappling hook to swing between targets.

Retrieved from "https://sonicfanon.fandom.com/wiki/Espio_the_Chameleon/Marshalia13%27s_Universe?oldid=1786764"
Community content is available under CC-BY-SA unless otherwise noted.