I prefer others to show hatred than to show pity. 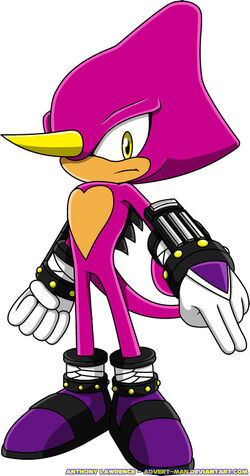 Espio the Chameleon is a character created by SEGA. He is one of the five members of the Chaotix. He is a very skilled ninja, and would be considered a great spy.

Not very much is known about Espio's very early life. His were both assasinated during a few months after his birth. He was raised in an orphanage with absolutely no-one to adopt him. He was left alone for a long time. He had nothing to do, and the world around him was absolutely silent. He'd look out the window and look at nothing but the leaves and wind blowing.

Much later, when he was around 6, he escaped the orphanage and lived his life in the woods. He wanted to become a bit more tough. Back in his old orhanage, nobody wanted to adopt him because of his species, and in the woods, he tried to overcome his sadness. Now, there's no sound, no life. Several years he spent in the woods, until a group of lions, tigers and bears.

The 3 animals taught him how to become one with the air. He learned how to turn invisible, which was a good defense whenever he gets into fights. He also made himself a little hut in the forest as his new, and apparently ideal home. Then, he finally got into school, starting extremely late. Luckily, the 3 animals helped him learn.

When Espio was 11, he went to the middle school in Mobodoon. He first joined the Key Club and was assigned a little child to help out with a partner. His name was Vector. Espio and Vector were assigned a child named Charmy. During the project, Charmy and Espio became friends.

In his last year of middle school, he met a student named Mighty. They became good friends. Then, Vector made up his newest project, the Team Chaotix Detective Agency. Espio, as well as Charmy and Mighty were on their side.

Espio is currently a high school student. He is a master ninja and is an elite member of the Chaotix Detective Agency.

Espio is very quiet. He'd usually be in his room meditating to maintain his calm. He doesn't really talk a lot, but he isn't mute either. He's more soft-spoken and thinks hard before he speaks. His words actually mean something sometimes.

Espio is also well-mannered. His disipline came from the three groups of animals he was taught by when he was younger. He shows this by keeping his house a bit cleaner than everyone elses.

He is also very serious. He doesn't really tell any jokes, nor does he laugh. If he does, it sounds like he's being a bit more sarcastic.

Espio has the ability to turn invisible in amazing ways. You never know where he is, even invisible characters can't see him. He uses this as a defense, as well as a suprise attack on others.

Espio also has a weird shadow trick that allows him to teleport. He first turns invisible, and then two shadows rush together and become him.

Espio is very good at flute playing. He learned this from the three groups of animals when he was younger. As a sweet suprise, he sometimes does this to Ashley when she wakes up.

He also has the ability to play the ukelele. He isn't very good at it, as seen in Sonic Heroes, when he uses Chaotix Blast.

Espio is very good at ninja arts, as he can perform acrobatic tricks, while fighting off enemies. It's a very helpful technique to use when fighting.

Espio is also pretty good at fighting hand-to hand. He sometimes uses his invisibility powers to sneak up on others too.

"What did you want me to investigate, this time, boss?"

Espio and Vector are good friends. In the agency, Vector wants Espio to investigate crimes. They also hang out a lot.

"Just be quiet and turn on your signal."

Charmy and Espio are good friends. They usually like to talk, but sometimes Charmy really gets on Espio's nerves.

"... There's not many words to describe your behavior..."

Mighty and Espio are really good friends. They like to talk a lot.

Julie and Espio don't really know each other very much. They don't talk a lot either.

Ray and Espio don't really know each other. They're close acquaintences though,

"I guess I'm the only one in the agency to actually appreciate your request in help."

Silver and Espio have been good friends for quite a while now. Ever since they met in the chao incident, they always hung out.

"You seem friendly, and poweful too..."

Ashley and Espio are close friends. They have known each other for a while, and work together in the detective agency.

Retrieved from "https://sonicfanon.fandom.com/wiki/Espio_the_Chameleon/Darkest_Shadow%27s_Universe?oldid=1530118"
Community content is available under CC-BY-SA unless otherwise noted.