Eric Hasu is a Seedrian boy. He's a friend of the members of Team Sweet. 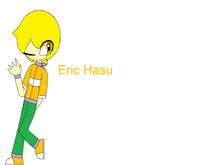 Erica led a fairly normal life, so there's not much of a story there...

Moving on to his current life, he is friends with Erica Sakura. He hangs out with Team Sweet often.

A cute nerd, Eric is sweet and caring. He tries to stay out of other people's business, unless specifically asked to be part of the situation. Simply put, he's just the Seedrian next door.

Eric had short, blond hair and orange eyes. His shirt is orange and white, and his pants are green and purple. He wears a scarf around his neck and has freckles. 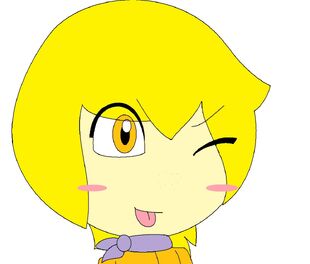 Eric being a bit of a goof. He's a good combination of dorky and cute.
Add a photo to this gallery

Eric is voiced by Miyu Irino in Japanese and Dan Green in English. These are some things he'd say:

"Aw! That's the third time you beat me!"

"Yeah, I didn't wanna look like a girl, so I plucked my lotuses out. Eventually they stopped growing on me."

Retrieved from "https://sonicfanon.fandom.com/wiki/Eric_Hasu?oldid=1800494"
Community content is available under CC-BY-SA unless otherwise noted.