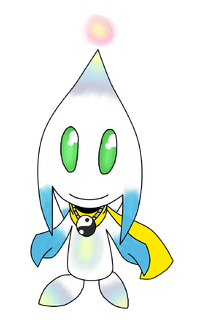 Equity is a Light Chao, as such he is very small only clocking in at about 11 inches tall. He has one large spine protruding from the top of his head, the markings on this spine are colored pale yellow, green, blue and purple. He has two smaller spines protruding from the sides of his head, they curve forwards and sport blue highlights. He has one last spine curving downward off of his head, this spine also sports blue highlights. He has a small body, his belly is colored the same as his top spine, as are the tips of his stubby feet. He has two longer arms, and crab-claw like hands-- They're also colored blue. A small ball of light floats above his head. The ball of light seems to change shape depending on how he's feeling.

If he's really happy or lovestruck, it will form a heart.

If he's tired, hurt or upset, it will form a kind of tornado swirl.

If he's surprised, it will form an exclaimation mark.

If he's confused or curious, it will form a question mark.

Equity wears a plain yellow scarf at all times. He also wears a strange orb around his neck, hanging by a thick silver cord. The orb is colored black and white, and resembles the yin yang symbol.

Equity is the guardian of the Neutral Garden. He doesn't seem like the ideal chao for the job at first. He comes off as scatterbrained and far from bright. He's too laid back and can even seem kind of lazy. He is capable of getting himself together and really doing work when he needs to though, but this usually only happens when he gets yelled at-- or if a Chao in his garden is in danger. He tends to keep his fun-loving and laidback attitude even in the face of danger, though. And in that sense, he can also be called rather oblivious.

He's generally a nice guy, and tries to make friends with everyone he meets despite outside appearances. He's not one to hold judgement against anybody. He enjoys helping chao that need help and guiding them through whatever their stuck on. While he's usually likeable, he can be a bit nosy at times and often gets himself caught up in other peoples business. This is usually of his own accord. He's very patient though. When it comes down to it, he's really good at bringing everybody together and somehow manages to get stuff done when it needs to get done.

Like most grown up Chao, Equity is able to fly. His ability to fly is better than that of most chao, however, due to him being a Chaos Chao and having trained for a very long time. He may not be as good as a Mobian capable of flight, but he's good enough. He's very fast in the air, and his able to hold himself up for quite a while.

Equity is also able to swim quite well. Swimming is not his strong suit, but he can swim rather quickly for a good amount of time. He prefers flying and running over swimming, however.

While flying would be a lot more conventional, in times where he might not be able to fly he can scale rocky cliffs with little to no problem. He's powerful enough to scale some pretty big rocky walls.

While this might not seem like the most fantastic skill, Equity is one chao that is able to speak English. It may be because of the orb around his neck, as he gained the ability to speak normally upon acquiring it. He can also understand chao speak just fine, being a chao and all.

Being a Chao, Equity may not be able to match up to most mobians in terms of any skill at all. He is stronger than most chao, however, or at least a lot of the chao on the island where he lives. He is very fast for a Chao, however. He is able to move quite quickly in the air or on his feet. He also has above average strength, and can manage himself on his own.

Being very small is an advantage to Equity, a small moving target is harder to hit than a bigger moving target after all. He can get around very easily and is very light on his feet.

Being a Chao, he can also get away with things that others might not be able to get away with. His child-like demeanor and looks may allow him to do so, depending on who he's talking to.

Equity is a little bit frail, though not by too much. His defensive capabilities are not as good as his offensive capabilities. He's small, and his smallness can also be a hinderance to him. He's easily overpowered because of his size and the fact that he's still a Chao, Chaos Chao or not.

He can be ignored by those around him that may be bigger than he is, because of his size and species. Especially when he's trying to talk, due to that being very unusual for a Chao to do.

He is prone to being treated like a child due to being a Chao. He hates it, though.

Tranquility the Angel Chao- Equity gets along with Tranquility just fine and thinks of her as a good friend of his. Sometimes he'll leave the Neutral Garden to go talk to her, which she disapproves of but he's used to it.

Discord the Devil Chao- Even though Discord is a bad chao, Equity still considers him a friend... just with a few... problems. He thinks that, deep down, Discord can be a really nice guy and it just takes a little bit to make that show.

Retrieved from "https://sonicfanon.fandom.com/wiki/Equity_the_Light_Chao?oldid=1799670"
Community content is available under CC-BY-SA unless otherwise noted.