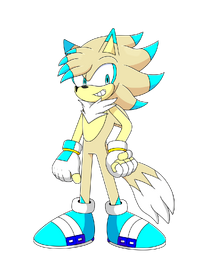 Strengths: His Telekinesis is so strong that he can even lift stars and moon and sun and water and even able to close portals go through time hole and black hole and timelines, and he is pretty fast, but nowhere near as fast as Sonic, and he also has lightning and wind and star powers

Weaknesses: He can mix all his lightning, star, wind, water and telekinesis powers to create giang powerfull spirit ball and time stop beam. Without his gloves he cant use telekinesis.

He's like mix of Sonic, Silver, Tails and Amy he is helpful, adventurous, happy, cool.

Dan was born in Holoska raised in Christmas Island.

(Dont take it seriously its only concept)

One night when Dan was sleeping his parents heard "Grrrrah Arrrgh" next they heard Crying and Sobbing then they waked up and saw Monster fighting with Missy's Parents, Missy was crying and then Dan's father sayed "Chaos Light" then a white flash was created and he shout "Chaos Control" and teleported in front of Ice Monster and says "calm down" and used his sleeping powder on that Monster and then he saw Missy's Parents dead. Dan's parents grabed Missy and walked to her house one thing they saw was Mephiles the Dark teleporting on back of them and shout "Dark Chaos Lance" and then Dan's Parents passed and its unknown about them then Mephiles vanished and Missy emotion was "O-O and :( sad". Then there was day now and Dan waked up alone he comes out and one thing he saw was Missy's and Dan's parents dead he cryied and then his adventure and new life started.

Add your characters to any of these groups if you consider them friends or enemies with this character. 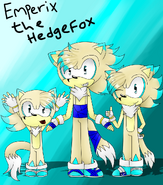 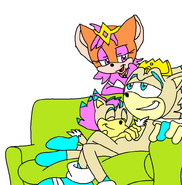 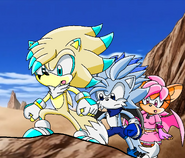 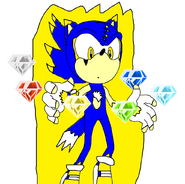 Super Emperix
Add a photo to this gallery
Retrieved from "https://sonicfanon.fandom.com/wiki/Emperix_the_HedgeFox?oldid=1837583"
Community content is available under CC-BY-SA unless otherwise noted.