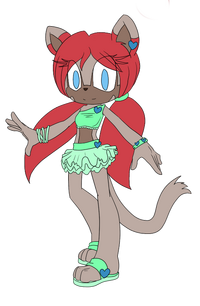 Emiko is a 14 year old brown ticked tabby. She stands at three feet, two inches and weighs 70 pounds. She has natural red hair, which is tied back into twin tails with stretchy, green ponytail holders. When Emiko's hair is let down, it reaches down to about her knees. Her eyes are baby blue, matching the many heart accessories she wears. She also has a patch of dark brown fur on her stomach, which is noticeable between her shirt and skirt

Emiko wears a lime green, one-shoulder, spaghetti strap crop top with a blue heart button attaches to the top of it. She also wears a spring green short, ruffle skirt which is held up with a slightly darker colored belt, pinned up with another blue heart design. Emiko also wears lime green sandals with blue heart designs sewed onto the sides. As for accessories, she wears several spring green leather straps on her right arm, and a bracelet on her left with small hearts. Also, on Emiko's left ear is a heart earring.

Emiko currently lives in Station Square, Mobotropolis. Both of her parents are living, but do not spend much time with her since they go on lots of business trips around the world. So, she lives mostly on her own in a small house right outside the city. However, she's not at home much, and enjoys participating in activities with others and making friends. Currently, Emiko spends most of her weekdays at the gym, training in various Olympic activities that she enjoys.

When Emiko has free time to herself, she enjoys visiting Green Hill Zone and spending time running and playing with the animal friends there. That's where she befriended her first met chao, Haku the Dark Chao. They are currently best friends, and Haku sometimes visits the city along with Emiko.

Emiko can be described as bright and cheerful, always supporting her friends. She's happy and upbeat, always smiling and shows care towards others who need her help. Along with this cheerfulness is a load of energy, making some people describe this cat as "hyperactive". Emiko is always ready to play and work out, loving to get out of the house and enjoy the activities of the outdoors.

Sometimes, Emiko can also have an aggressive nature when it comes to getting things done. When she sets a goal, she expects to get it done. This goes for her friends as well, pushing them as far as they can go to get the job done at whatever cost it takes.

Emiko is also easily embarrassed and flustered, especially when it comes to thing like love or personal things. She doesn't like telling other people her secrets, because she thinks that they are sometimes dumb and childish and no one should know about them. This can also be included when she has a personal problem, and despite needing help, doesn't ask for it. This is due to her overconfidence in herself. However, when she does receive help, Emiko greatly appreciates it.

Emiko is very agile and acrobatic, allowing her to successfully do various flips and tricks with ease that would usually be difficult to others. She can easily balance on various beams and bridges, and cross to the other side without falling. Also, because of her strong cat genes, Emiko always lands on her feet when falling from the air, and almost always land a pose when flipping off of a balance board. She is also a skilled martial artist, and still practices to perfect this strength.

Along with the extreme acrobatic skills, it is also known that Emiko has very enhanced speed. Her agileness is only a part of this power, as Emiko is usually seen running at inhumane speeds. While we can't exactly consider it "superspeed" since she's not as fast as characters like Sonic and Shadow, Emiko is much faster than the average Mobian and can beat almost all of her friends in a race at any time as long as she has enough energy. Everyday as she trains more and more, her speeds and powers increases.

Because Emiko is very acrobatic and flexible, she is a very talented gymnast and finds the various gymnastic activities fun to participate in. Her favorite gymnastic activity is the balance beam, because it tests both her flexibility and balance in a way that she finds fun. She also enjoys uneven bars and the speed that they provide when spinning and jumping, making it yet another workout that Emiko can enjoy.

Retrieved from "https://sonicfanon.fandom.com/wiki/Emiko_the_Cat?oldid=1798662"
Community content is available under CC-BY-SA unless otherwise noted.