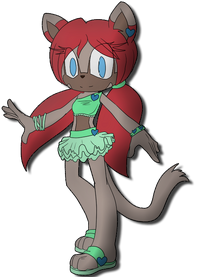 Ricky the Cat (リッキー・ザ・キャット Rikkī za Kyatto) is a female, anthropomorphic cat owned by Nikki-Kaji. Ricky is very energetic, always on the move and making new friends everywhere. She has very good acrobatic skills and reflexes, and can also turn into a tornado by spinning around very fast.

Ricky keeps her hair tied up in two pigtails, which are held up my two spring green hair rings. When let down, her hair reaches about the center of her back. She has a spring green half shirt with one strap. She also has several lime green wristbands.

Ricky is very energetic and hyper. Her joyful voice and happy tone always seems to brighten the mood around her. People will sometimes compliment her, saying she's a ray of sunshine and other type of things.

Ricky can also get easily confused sometimes. Not that she's dumb, but she's not the smartest person either. Her mind sometimes tends to wander off when trying to listen to someone. But sometimes, her simple mindedness "amuses" people.

She can also be seen as a very goofy person around her friends. She expresses this by sometimes jumping on their backs, telling jokes, or whatever else she can think of at the moment. Ricky is not the one to usually get into fights, always trying to calm down

On rare occasions, Ricky can be easily offended, but not show it. She does not retaliate when this happens, but rather growls under her breath and keeps the words to herself. Ricky also hates it when people boast about themselves, and says that they're better than others. Although, again, she is rarely offended, she dislikes it.

Ricky does not exactly have any special powers, except for her very high acrobatic skills and reflexes. This makes her able to dodge stuff really easily, and go through the hardest places with ease (like a laser trap). She can also be considered light on her toes.

Ricky also does not get tired very easily. She can run around a very long time without getting tired, and it usually only takes a small nap and a bottle of water to regain her energy.

Oh, and let's not forget her tornado spin skill! This allows her to turn in a mini size tornado and take out enemies around her. But Ricky cannot do this for to long, or she will become very dizzy. This has happened in battle once, and she was an easy hit for the enemy.

Ricky lives with her dad in a city called MerryMill. Everyday when she wakes up, Ricky goes on a jog and says hello to the people of her city. She usually stops at the gym on Saturday mornings to work out.

When she's not working out, Ricky plays with her pet chao Haku. Ricky found Haku when Haku was found wondering the streets of MerryMill, all alone. She brought her home and gave her food and a place to rest. Every since then, Ricky and Haku have been best friends and partners.

Ricky rarely is seen eating fast food on her own. Not that she doesn't enjoy them (she actually loves them!), but she doesn't want to get "fat". Her friends tell her otherwise, usually taking her to diners to "study".

As a kitten, Ricky was always joyful and playful. She loved playing with balls of yarn, and also running around everywhere. She lived with only her father, because her mother had mysteriously disappeared after an incident that shouldn't be brought up. Ricky still has faith that her mother is alive, and always remembers her. But she never lets it get her down, and stays happy.

A few years later, Ricky met Nikki at an after school event. They became good friends after that, and one time even sang in front of the entire. The agreed to sing the song 'Happy Synthesizer' because it expressed their personalities a lot.

Ricky and Nikki have known each other for quite a while now. They first met in Middle school, and became great friends (although they were two grade levels apart). One time, in an after school event, they sang the song Happy Synthesizer together (which is also Ricky's theme song).

Ricky and Haku are best friends. Ricky first found Haku when she was walking around (well, more like floating, since chao can't exactly 'walk') the streets of MerryMill. After she took the responsibility to take care of Haku, they

Retrieved from "https://sonicfanon.fandom.com/wiki/Emiko_the_Cat?oldid=1459241"
Community content is available under CC-BY-SA unless otherwise noted.