The Emeragan Eye, formally known as the Marushagan [Literally; Multiple Copy Wheel Eye], was an eye that was crafted from the brightest of emeralds; in fact, it was crafted from a portion of Saizo Marushagan's emerald coffin after he had died. It was the first attempt to implant Sharingan DNA into a non-organic container with unknown effects to revive the fallen Uchiha Clan.

The envision, revision and future vision of the Emeragan is one that has constantly changed during its time. A ninja by the name of Chiyoko was searching a way in order to revive the Sharingan, choosing Saizo as its first host. When it was first created, Saizo had named it the Marushagan; the Multiple Copy Wheel Eye was a perfect replica of the Sharingan, from being able to see even the slightest movements, to see the opponent's chakra flow and to copy their jutsu. The only difference was that the eye would gleam and glisten a bright emerald hue when it was used, somewhat giving away the use of it, but it wasn't a hassle in the midst of battle.

However, when Saizo served his time after death in Hell, the Marushagan began to mutate and change in ways not even thought possible; the eye began to lose the majority of its powers, such as not being able to see the opponent's chakra flow or to copy abilities. However, its powers of allowing the user to read his opponents attacks from slight twitches in muscle movement was augmented in a significant degree to the point that, when used, they would watch the opponent as though they were in a state of slow motion of several tens of frames a minute. More astonishingly, the Marushagan began to change in its materialistic composition, becoming biological like a real eye, thus making the gift of the Marushagan being able to be passed down egentically, to which Saizo renamed it the Emeragan, or the Emerald Eye. In a way, the Sharingan has once more been brought back into existence.

During Saizo's absence, Guyviroth reborn into a puppet body and given a pair of Emeragan created by Chiyoko, who had managed to make them into functioning biological eyes that was able to fuse with Guyviroth's DNA, making them inheritable. However, some of the Sharingan powers were lost, much like with Saizo, but instead were replaced by the powers of the Rinnegan, noticeable by the purple-silver circles in the eyes; Chiyoko now attempted to fuse both powers together in order to successfully revive the Sage of the Six Path's powers.

Because of its Sharingan composition, the Emeragan had all of its powers, but has since been rendered to a more unique Doujutsu;

The Emeragan, much like the Sharingan, has a standard form of one tomoe, then two, and finally three as a biological, inherited state, although Saizo and Guyviroth had started with three due to their powerful chakras at the time of implantation. Each Emeragan can also achieve a higher state, much like the Mangekyo Sharingan. However, each one branches into three different forms;

However, by transplanting the eyes of a higher state Emeragan with another, one can obtain an "Eternal" version, which increases the powers of all three Mangekyo techniques. However, unlike the Eternal Mangekyo Sharingan, an Eternal Emeragan does not have its form changed from the user's original Emeragan form, even when changing from Mangekyo or Manjishin to Mangoukon. 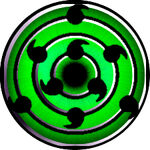 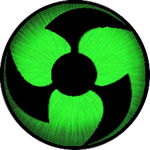 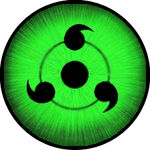 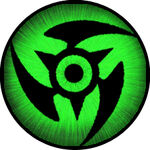 Guyviroth's original Mangekyo Emeragan
Add a photo to this gallery
Retrieved from "https://sonicfanon.fandom.com/wiki/Emeragan_Eye?oldid=1383598"
Community content is available under CC-BY-SA unless otherwise noted.