Start a Wiki
This is an article about Eloise The Timberwolf, a character created by Alphonse Uprising on 05/25/2017. 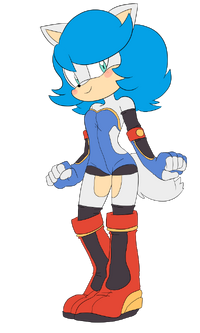 Eloise Hasenkamp is a German timberwolf. Born in Aachen, Germany, she wields Francesca, a giant paintbrush that is capable of creating 3D constructs.

Her name "Eloise" comes from the Old French name Héloïse, which is probably from the Germanic name Helewidis, composed of the elements heil "hale, healthy" and wid "wide". It is sometimes associated with the Greek word ‘ηλιος (helios) "sun" or the name Louise, though there is not likely an etymological connection. This name was borne in the 12th century by Saint Eloise, the wife of the French theologian Peter Abelard. She became a nun after her husband was castrated by her uncle.

Eloise is a bright blue timberwolf with mildly short hair with sweeping bangs that covers half of her eyes and her cheeks. Her eyes are greenish-blue, almost like cyan. She wears a royal blue leotard-like zip-up suit with white secondary colours on her chest and limbs. Her gloves and boots are also royal blue, with yellow highlights.

Eloise is quite an outgoing and active individual. Although she’s not one to start a conversation first, she enjoys having one with people who approach her. There have been a few times where Eloise had been the first to say something in a conversation, but this is when she either already knows the person or really likes them. She regularly speaks in a soft voice with a faint accent slightly resembling Frankfurt .

Eloise enjoys going on adventures and exploring never-before-seen places, but she knows how to play it safe and will not partake in those that may risk her own life. As a hero, Eloise doesn’t believe in murdering enemies for justice, and even finds it inhumane. She also enjoys painting and drawing as well, especially of landscapes and scenery. Eloise loves light, pastel colours; she believes these kind of colours are quite relaxing to the eyes and can make quite beautiful images.

Eloise was born to the lesbian couple of Cyan and Amalia Hasenkamp in Aachen, Germany, on 24th May, 2000. Not much was known at this point, but she lived a relatively normal childhood. Back then, although gay marriage was not illegal, there was a stigma surrounding it in town. As a result, Cyan often adopted masculine mannerisms in public to make herself appear to be a boy.

Francesca is a giant paintbrush Eloise carries, with paint that uses exotic matter to create constructs out of itself.

With certain strokes, Eloise can create walls of paint that change into different colours, as well as "paint bullets" that fire beams of poisonous paint towards enemies.

When a construct forms, it is originally liquid, before freezing almost immediately. The construct would be as hard as fiberglass once it freezes, and would be fixed in mid-air. The construct can be easily destroyed by heavy enemy fire, and shatter completely like glass.

Artist: Eloise is a talented artist!

Nyctophobia: Eloise is afraid of darkness. Simple as that.

Retrieved from "https://sonicfanon.fandom.com/wiki/Eloise_The_Timberwolf?oldid=1798402"
Community content is available under CC-BY-SA unless otherwise noted.