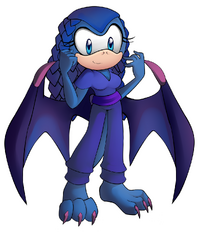 Elly the Dragon is a dragon girl lost in the world after leaving her Kenjutsu/Iaijutsu master and guardian, Asmer the Butterfly. She is quiet, shy, and somewhat stoic as a result of her sheltered upbringing; but she's looking for a less lonesome life where she can be more open to people. She also has to deal with a dragonic curse of greed that forces her to stockpile treasures and money. Leaving this curse unsatisfied threatens her sanity; if she cannot keep a steady flow of wealth, the true nature of the dragon will arise..

Elly doesn't have fur or hair like most Mobians. Metallic blue scales replace her hair, being scalehair of sorts. Her body is mostly different shades of blue, and to compliment this, she wears blue clothing. She has a katana that she uses on occasion, but most of the time, she's carrying around her practice shinai instead. Elly's tail is fairly long and bulky. When not wearing her usual attire, she can be seen wearing a kimono as casual attire. She sometimes carries around an exotic umbrella when in a kimono.

Towards people she doesn't know well, Elly is shy and reserved. It is hard for her to trust people at first, due to the teachings (and abuse) of her old master, Asmer the Butterfly. While she wants to have people to confide in, she knows that it isn't so easy to trust people at first. When she warms up to a person, she is as sweet as can be to them, but occasionally forgets about cultural boundaries. As a sheltered girl, she doesn't grasp modern societal customs for communication and expressing kindness yet. As a result, she can make some rather unfiltered remarks. Elly also has trouble with technology, having little to no experience with the modern world.

Being from an isolated culture, she has many foreign mannerisms that she considers normal. The following is a list of these:

Asmer has also taught her to be wary of hedgehogs, foxes, echidnas, and cats, though not for politeness.

Elly's defensive Kenjutsu requires extreme levels of focus on her part. She is able to clear her mind easily when in a difficult combat situation, a skill acquired from Asmer's harsh training. This specific capability isn't limited to battle; if she's overly pressured by a social or other kind of situation, her mind may naturally disassociate. Elly is quick witted enough to be a decent problem solver, at least when she's dealing with concepts that aren't foreign to her. However, when her brain disassociates from a tense situation, she freezes up, and has to take more time to deal with issues. This usually happens for moral quandaries, since she isn't trained to handle them.

She is also still developing her moral compass. Most of her civilized life was spent with Asmer the Butterfly, who treated her like a pet. While she knows how to be polite, she doesn't understand several moral concepts yet, as Asmer hadn't taught her all of them. For example, Elly doesn't usually steal from others, but the reason she doesn't isn't because she thinks it's wrong, but because the reaction from most people is negative. She does know that killing is wrong, at the very least, which is why she often opts to use her less lethal wooden shinai as her usual go-to weapon. Elly learns a bit more about morality every time she interacts with other people, like her best friend Mona the Mink.

Perhaps Elly's biggest personality vice is her lack of self-confidence. When interacting with others, she often feels like she's doing certain things wrong, especially when trying to be polite or proper. In battle, she often belittles herself compared to whatever or whoever she is facing. Her confidence problems can be linked to Asmer's harsh training, and from his treatment of her overall. Whether she will be able to overcome this is yet to be discovered.

Elly generally dislikes dealing with arrogant people, whether they're friend or foe. She tends to distance herself from people who behave like that, and it is hard to get a second chance from Elly if you betray her trust.

Elly has to stockpile treasures, gems, and money, as part of the curse of her race. Despite going so far as to have treasure "flavor profiles", she feels little personal attachment to the riches she needs, except for well-crafted weapons (she considers them practical works of art). Regardless, an urge drives her to collect and stockpile more and more treasure. When she collects a treasure, she feels a rush, the intensity of which depends on the value of the treasure. This rush is addictive, and pleasing to Elly's Id, but she resists losing herself to it. She hasn't had to resort to stealing to satisfy her curse so far, but could do so out of desperation. If she goes without collecting a treasure too long, the true nature of the dragon will show itself for a while, something she constantly worries about as time without treasure goes by. She feels intense pain when treasure is stolen from her, which also triggers the dragonic nature within.

Prior to being educated by Asmer, Elly's mannerisms in general were primitive and wild, as she was simply a wild creature then. While she generally behaves politely nowadays, she can sometimes go back to a partially untamed way of doing things, especially when she's alone.

The personality of her draconic form is that of a starving beast, and she reverts back to her previous primitive way of thinking. She does not senselessly kill, but her desire for treasure can lead her to steal, or even attack on occasion. Upon turning back to normal, Elly feels deep regret for morally wrong actions she undertook in her hunger.

Elly is actually an adaptation of a character in an original project of mine, not tied to any kind of fandom. More information about her history will be revealed as plans for her come into fruition.

Her favorite food is steak cooked medium rare, and in general she enjoys meat products. She has oddly simple tastes, rarely liking when too many flavors are mixed together. Milk products like cheeses are also high on the list of foods she enjoys. In terms of sweets, chocolate is her favorite.

She's afraid of mushrooms and slugs.

Elly has an extremely fast top flight speed, compared to other flying creatures, but this has nothing to do with being genetically more fit for flight in general. The reason she has such a high top speed is overheating in normal creatures: regular flying animals have to stop at a certain speed or else they'll begin to hurt themselves from the heat, while Elly can naturally take the heat. She does however have to stop at the point where her clothes would burn off.

Elly's elemental infusion powers are a special case for the dragon race. Most dragons have an element sac near their mouths for breath attacks. While Elly has one too, hers is extremely small. However, her elemental power is spread throughout her body instead.

Elly's mannerisms are derived from a subservience complex that developed from her time with Asmer the Butterfly.

The dark blue, diamond-shaped cloth patch at the top of her shirt is a small pouch in which Elly keeps small objects like spare rings/jewels/etc she finds. Some of her pictures have the pouch open, with the top flap folded up, making it seem like a dark blue, diamond-shaped area. On the top flap's back, there is a button that snaps the pouch shut when Elly has objects in it. Thus, some of her art shows the pouch closed (like this treasure basking picture).

This character's fourstat code is 8845

Retrieved from "https://sonicfanon.fandom.com/wiki/Elly_the_Dragon?oldid=1689532"
Community content is available under CC-BY-SA unless otherwise noted.