View source
This is an article about Elizabeth Thorn, a character reimagined by MaverickHunterSigma on 6/16/16 after adopting her at an unknown date.

<Lie> Say, you look pretty nervous about something. I'm not going to ask why, but I can offer you this piece of candy. It'll, uhh... soothe your anxiety problems. 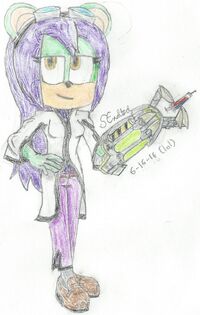 Elizabeth Thorn, also known as Liz for short, is a fan character whose original creator wishes to remain anonymous, and was reimagined by OmegaExalted. She is an inventor of devious machinations, and has a profound love of games and chocolate.

Liz is a cynical and selfish woman, often refusing to do things that don't specifically benefit her in some way. There are few extremes that she won't go to in order to achieve her goals. That being said, as long as she is rewarded for her work, she'll spare no expense to fulfill her end of the bargain.

Liz is also shown to be manipulative and impatient, especially when it comes to her research. Her only concern is getting the results of her work; whatever happens in-between is none of her business. This attitude makes her extremely productive in her work, but also makes her blind to the consequences of her actions. However, she's fully prepared to clean up her own mistakes when she deems it necessary, meaning she isn't completely without a moral compass.

She suffers from being anti-social, and is highly irritable around people she doesn't know. If there is a good-natured side to her, then it's reserved for her brother and her close friends.

Liz is a small, slender pika who always seems to have a tired expression on her face. Her fur is an ivy green while her hair is a vivid shade of violet, which is styled into three distinct bangs in the front. Her hair is very long in the back, reaching all the way down to her waist. Her eyes are amber, though her eyelids are rarely open more than halfway. Her skin is a light tan. She does not have a visible tail.

Liz is always seen in her white-and-black lab jacket, worn over a sleeveless (or short-sleeved) blue-violet turtleneck. She also dons a pair of comfortable red-violet capri slacks that end above her ankles, fastened around her waist with a small brown belt. For shoes, she wears brown loafers with gray socks. She is often seen with a pair of lab goggles on her head.