The author of Elias the Echidna considers this page to be unfinished. As such, some sections may change.

Do you think I would even dare betray the Dark Legion? Perhaps I might. Perhaps I won't. It's all just a game, a game of loyalty. And I intend to win every time. 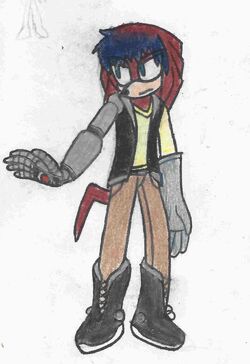 Elias Rex is a near identical clone of Moritori Rex created in the Fractured Zone. When the Super Genesis Wave hit the Fractured Zone, Elias lost all memory of his origins. He then wandered the now-apocalyptic world in search of his identity, gaining allies along the way. Eventually he discovered who he was prior to the Genesis Wave. Elias now grudgingly takes on the role of the Grandmaster of the new Dark Legion- replacing the original Dark Legion that existed prior to the Genesis Wave.

Elias was clone of Moritori Rex developed by the Dark Legion in case Moritori died. He was created in the Legion Laboratory 104. One of the scientists, Dr. Blizzard Cooper, felt that Elias could be more than what the rest of the Legion wanted, and what the Legion wanted was another Moritori Rex. After about ten years of planning, she managed to free Elias from his confinement, only for him to abandon her in the escape attempt when she was caught by the guards.

About a year after Elias escaped, the Super Genesis Wave hit and tore apart most of Mobius, and also wiped all of Elias' memories. 

Elias is a self-serving individual and almost all of his actions are to benefit himself. The only people he cares for are Manchester the Lynx, Marta the Dog, and Rebecca the Parakeet- and he even acts that way towards them as well, though on a less severe note. Elias, like Moritori Rex, has a strong loyalty towards the Dark Legion. This trait, which was literally programmed in this brain when he was created, often comes in conflict with Elias' self-serving attitude and makes his actions questionable to even himself.

It also seems as though Elias suffers from several personality disorders- including some form of dissociative identity disorder and a minor case of bipolar disorder. Because of both these disorders, Elias occasionally either exhibits behaviour similar to Moritori Rex's- due to the dissociative identity disorder combined with the fact that Moritori's personality was also programmed into his brain- or goes into a fit of rage due to his bipolar disorder. Often times this makes it questionable as to whether or not he is fit to be the Grandmaster of the Dark Legion. It also makes him rather unpredictable, and somewhat unstable.

Elias has an interest in music, much like his girlfriend Manchester, and the two would often sing in a chorus while gathering supplies.

Elias is a cryokinetic- meaning he can create and manipulate ice and snow to his will. However, this takes a lot of energy, so he rarely uses this ability. Elias is able to hack into some computer systems, but many are far too complex to him.

Elias' cybernetics and genetically altered body both often help him accomplish feats that are often difficult to most Mobians. However, this is at the cost of good dexterity, which is often a key trait that is required in combat or other situations.

His cybernetic right arm can transform into a grappling hook, which is good for not only swinging from place to place, but also for grabbing enemies from a distance and pulling them closer for a close range attack.

Elias' cybernetics are not immune to EMPs. Though they will eventually reactivate later, this weakness can severely hinder the echidna's performance. He also, as mentioned above in the abilities section, does not have good dexterity- a trait often needed in many situations. Elias also cannot survive in high temperatures, due to his cryokinesis.

Due to his dissociative identity disorder and his bipolar disorder, Elias may now and then behave erratically or go into a fit of rage, which could be potentially dangerous depending on what situation he, his friends, and/or the Dark Legion are in.

Elias is male Echidna with short, thick burgundy fur and midnight blue bangs that hang over his turquoise eyes. Other than these minor differences, physically he resembles Moritori Rex, both in facial features and stature. He has a cybernetic right arm that carries a grappling hook inside the lower half, making it a bit bulky.

He typically wears a light yellow long-sleeved shirt that is covered by a sleeveless black jacket. Elias wears a glove on his left hand with the cuff reaching his elbow, while his right hand is exposed due to it being cybernetic. He also wears tan pants held up by a metal belt and a pair of hiking boots.

"Who am I? I am Grandmaster Elias of the Dark Legion."- One of Elias' first quotes in Depths of Dimensions

Retrieved from "https://sonicfanon.fandom.com/wiki/Elias_the_Echidna?oldid=1811441"
Community content is available under CC-BY-SA unless otherwise noted.