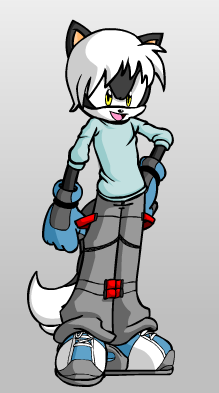 Eli is a white and black catcoon (or a raccoon/cat hybrid). Eli has a black "mask" around his eyes. As he is a catcoon, he has a very bushy tail. Eli wears simple, casual clothing. He wears a light blue sweater with a white undershirt. He wears gray and red jeans. He wears black socks along with his light blue, low cut, sneakers. He has blue and gray gloves.

For a secret spy catcoon, Eli's personality is different from what you'd think. For his psychology and perception, Eli is pretty competent. His self-discipline shows he is focused in everything that he does. For his lifestyle he carries out, he is rather down-to-earth, yet solitary. His social attitude is outgoing. He is very self-confident, and a lone worker when necessary. He is a trusted confidante. His emotional capacity is rather apathetic and unsupportive. As for his current mental state, he is mostly feeling superior.

Eli was born into a basic life. He had a business worker as a father and a kindergarten teacher for a mom. He is an only child and didn't have many friends. Most of his time was spent eavesdropping on anyone from teachers, to fellow peers, people in the street, and even his own parents.

At age 9, he began to develop the talent of hiding fairly well. Being unusually short, he could hide in small spaces. This was very useful when hiding from people when he was either in trouble or doing recreational activities like Hide and Seek. As he kept hiding, he trained his body to be very flexible. This helped him with his spin dash technique.

At age 11, he developed his agility and parkour skills. He found this out when he was running from a bully and had his head turned to look at him. He looked forward, not noticing the pole he was about to run into. He instantly side-stepped out of the way and jumped, planting his foot on the building next to him, and climbing on top of the building on the opposite side of him. He then ran off to safety.

At age 14, he learned his spying and sneaking skill. He would listen to walls to hear voices. He could feel vibrations on the ground. He would hear footsteps fairly easily. He could also hear people nearby breathing. If he was close enough, he could hear a heartbeat.

Now, at age 16, he stared to build and buy spying devices. He is a lone wolf-type spy. He is hired by people that call him, yet he wants to be hired by anyone to work permanently.

Eli lacks powers. He is a simple, average catcoon. He cannot gain any super forms.

Eli does not have any special abilities that are supernatural or anything along those lines. He's a simple catcoon.

Eli is extremely against fighting women. Although he isn't dating anyone, he believes it is not okay for a man to fight a woman. With this said, he will basically stand down against a fight with a woman.

Retrieved from "https://sonicfanon.fandom.com/wiki/Eli_the_Catcoon?oldid=1852969"
Community content is available under CC-BY-SA unless otherwise noted.