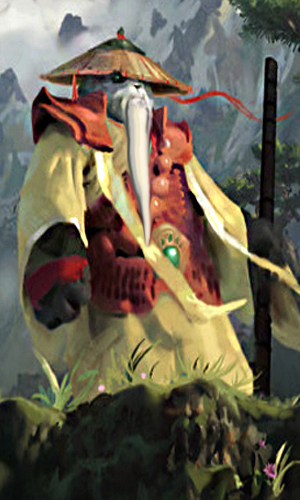 Elder Panda is the eldest inhabitant of the Hidden Forest Village, and as such has earned the title of Elder. In an otherwise eastern-oriental themed village the Elder runs an old temple dedicated to the worship of all deities, although within its walls and courtyard he trains students in the way of Ninjutsu. His last two disciples were Espio the Chameleon and Jin the Hedgehog. although many speculate that Shousenka the Echidna also trained here at one point though not confirmed.

The Elder Panda was said to have founded the Hidden Forest Village at some point during the 1874 Japanese Saga Rebellion. The panda left the Asian isles with knowledge of unique martial arts and samurai skills that has become widely known as "Ninjutsu" to the point that even he himself had started noting them as such since prior to this the techniques had no collective name.

In time the Panda transformed what was once only a dense forest landscape with a small clearing into an entire village that was hidden from the world and yet still under the noses of those who ventured forth. Within decades people had come to find it as a place of respite and, in due time, cultivated a population of its own.

Even to this day the Elder still loves on and as strong as his prime regardless of his advanced age. Still considered the chief or leader of the village by his subjects he continues to overlook his people as well as give training to those who have sought him to discover the powers of Ninjutsu.

The Elder is a man of great wisdom and knowledge to the point that even the most stubborn of people tend to seek his advance should they feel they require it. The Elder tends to speak it tongues that most people find his words confusing or just outright nonsense, at least until they finally realize what his words mean.

Cheerful to the point of almost a fault the Elder always tends to keep his spirits high even in times of distress either onto himself or others, including his villagers. The panda is always seen with a pleasant disposition simply because he believes that regardless of what goes wrong, someone will finally fix it.

The Elder is often incredibly polite that he rarely ever deviates from the acts of good will or selflessness unless he can sense negativity in one's favors; an example of this would be that he has never denied someone in teaching them the arts of Ninjutsu should they show exceptional determination in its study, but he had also denied someone that request simply because he senses a darker ulterior motive to learning his teachings.

Despite his complacent attitude the Elder also has a serious, threatening, even a killing side to him; having been around since the old feudal age of Japan, to where his teachings originates from, he knows the art of survival and the instinct to kill should he need to. It is said his prowess with Ninjutsu is great enough to destroy entire armies.

Retrieved from "https://sonicfanon.fandom.com/wiki/Elder_Panda?oldid=1800485"
Community content is available under CC-BY-SA unless otherwise noted.