Start a Wiki
This is an article about El-Dor the Fish, a character created by Monk the Cat on 09/9/2013. 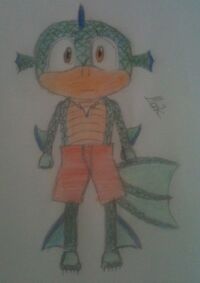 El-Dor is a light blue, and slightly green tinted fish, with a orange-tan belly and muzzle. He has orange eyes. He has a meduim sized fish tail with collapsible fins. He also has fins on his forearms, legs, a dorsal fin on his back, and one on his head. The insides of all but the tail fin are te sameorange-tan color. His feet are webbed, with small red claws on them. His hands can be webbed, or regular, depending on what he is using them for. His muzzle has two little nostril slits on the front, and his teeth are somewhat sharp, for eating. He has gills located at the back of his jaws, that allow him to breathe underwater.

He sometimes wears a pair of orange-red Bermuda Shorts, and sometimes a shark tooth necklace, with a few Orichalcum beads on it. Sometimes he wears nothing at all.

El-Dor has a warm and friendly, and often childish personality. He is relatively hyper and exciteable. He can often get curious or cause mischief, but never does mean any harm from it. He also has a sense for adventure and will often go off on wild goose chases, but then return happy, instead of disappointed. He is very optimistic, and always cheery. He also has a child-like obsession with shiny metal things that he will try to collect and use or make into something else.

El-Dor's history is mostly unknown, but what is known is that he lived with a friendly and caring family, but left for the excitement and adventure that he could find on his own. It is unknown what happened to his parents, but it is possible that they were eaten by sharks, hence raising  his phobias to a much higher level. His parents had taught him to fear sharks, cats, raccoons, dolphins and other creatures that might want to eat him, before he left, though.

Currently, he is going about, exploring and finding friends, places and trinkets to satisfy his adventurous appetite. He has met several friends, usually beach-goers, but the friendships rarely lasted over a month because he'd move.

El-Dor is a naturally good swimmer, as a fish, and he can swim at speeds of over 50 mph, when he pushes himself. He is also naturally quick and agile, being able to leap nearly a dozen feet into the air and do several flips before landing. He is also able to breathe air, or water, depending on if he uses his gills or not. He has some night vision on land, but it increases nearly five-fold while underwater. Being a flying fish, the "armfins" on his, well, arms can be used to glide for short distances, or paired with his tail can be used to "fly" above the surfaces of water.

El-Dor is skilled at solving clues, and being very observant to find his treasures. With experience, he as learned how to solve problems, and come up with tools to help him. Speaking of tools, he has learned how to turn small pieces of metal and other trinkets into many helpful things. He is also moderately skilled in a jumping fighting style, utilizing his spears, or knives, but he is far from perfect, and can be rather easily defeated by a trained opponent. He can also fight well underwater, where his spear is more effective than other weapons like shields or swords.

Start a Discussion Discussions about El-Dor the Fish