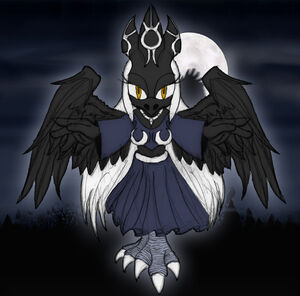 Eilistraae, otherwise known as The Moon Goddess or The Raven Queen, was a Greater Deity and the patron God of the Moon, Animals, Seduction, Deception and Trickery. It is said that she was also the creator or co-creator of the Babylonian race despite not being one of her Domains. Despite being of evil alignment she does not show cruelty or animosity to all mortals, only to those who defile her Domains or her clergy. She rewarded those who show absolute devotion to her and even left a piece of her power for her worshipers to use.

Eilistraae was followed by a large religious group under the name of the Church of the Raven Queen on the continent of Mundus, although during the civil war between Castillian and Skynord most of the churches in the provinces were either destroyed or abandoned. Those who did follow her, however, donned either robes of dark blue or bright silver. Every night the moon was out those who could see it were respectful to pray to their Goddess.

Despite her evil nature Eilistraae has not sought out conflict with any of her fellow patrons although it is well known that she has a close yet mutual relationship with Orion-Sigmus, enjoying his work as well as furthering her own knowledge for her own personal gain. Because of this she has close connections with other Shoukan patrons and thus had a cult following of Shoukan warriors.

Eilistraae has existed since primordial times, becoming the patron God of the Moon, Animals, Seduction, Deception and Trickery. Having no others to accompany her in her millennia of existing she became an evil deity although the vigilance of the other patrons have kept her in check.

As she became part of the pantheon she was drawn by Orion-Sigmus; a passed-on Shoukan scholar who became the Deity of Knowledge, Fate and Wisdom. Because of their mutual friendship the Shoukans were also drawn to worship her.

A few millennia ago, with the Shoukan's destroyed and the Churches of the Raven Queen on Mundus destroyed and her followers killed or renouncing their religion, her powers waned and was cast down from a Greater Deity to a Lesser Deity; she did not mind as it drew her closer to Orion-Sigmus than ever before.

Retrieved from "https://sonicfanon.fandom.com/wiki/Eilistraae?oldid=1677600"
Community content is available under CC-BY-SA unless otherwise noted.