Start a Wiki
A fortress made by Dr. Eggman to finish his doomsday weapon. It is located somewhere in Haunted Ridge. This is the final stage in Sonic and the Steel of Darkness. Unlike from all Eggman's base, its more like a creepy version of the base in Scrap Brain Zone. Eggman modified the base's defense system with the Nightmare Fog. Whoever enter it, will receive hallucinations effects from your imagination. The entire base was divided into sections: the Main Hangar, Med Lab, Weapons Archive and the Brain Realm (Control Room).

Act 1: Entering the Nightmare: The act takes place in the Main Hangar. Most enemies are flying types. The traps also consists of sentry turrets and Egg Pawns. Beware of the Night Lark lurks in the sky, waiting for the player to get shot. Once the player reaches the half of the stage, Tails will appear to take you to the base. Once the player finish the stage in the sky, Night Lark will start to battle you.

Boss: Night Lark- It attacks by extending his wings and fires lasers. It will also fires mines along the way. It will also try to ram you and fires homing missile on his tail. It can only be harmed when his wings are extended. The best weapon is the Nova Strike.

Act 2: Surgical Strikes: The act takes play in the Med Lab. The enemies are more like puppets and hallucinations. The traps are buzz saw, injection spike wall, booster canister (any status change). Sticky red glob are everywhere that can be use for climbing (most players thinks its blood). Once reaching the boss door, the room became dark and starts to sparks. The sparks electrified the canister and activated Blood Devil.

Boss: Blood Devil- The only weakness is the eye and can only reach by damaging the blob skin. It attacks by dismantle itself and went to the other side of the room. It will also form a wave that can crushes the player. It will form a spiked wall and the eye will shoot and ram you. After half of his health get damaged, the Blood Devil will transformed into an Egg Nega Wisp. It will attack by slamming or grab you with its claw. The best weapon is the Lightning Overdrive.

Act 3: Abandoned Memories- The next stage shows some monitors about Sonic's past adventures and statues that represents the badniks from Eggman's oldest creations. Most enemies will be hallucinations of your foes in the past. The traps are spikes, flipping floors and dripping acid. Once you enter the boss door, you will see a monitor and a machine that recreates Eggman's creations from Sonic 1 to Sonic Generations.

Boss: Robo Archive- The boss can only be destroyed once all the archives are destroyed. The archives were arranged from the oldest to the newest. Each one takes a few hits to be destroyed but the harder it will get. All of the weapons are the best choice in defeating the archives.

Act 4: The Brain Realm: The act has no traps and enemies but only consists of a boss run of the E-Series. After that, Eggman appears with his new machine, the Egg Nightmare. A cutscene is shown about Eggman is releasing the Nightmare Fog around Mobius.

Boss: Egg Nightmare- There are 2 phase in the boss battle. The first phase starts when Eggman creates a shield to protect himself and the machine. He will make puppets that looks like one of Sonic's friends and uses them to do the fight. After that, another cutscene shown and the second phase will start. The fight starts with Super Sonic and the only way to damage the machine is to ram the head. It attacks with the spinning laser, cross bomerang and fear scream. Before finishing it, the Egg Nightmare starts to use Darkness Cannon. Super Sonic will use Bio Spectral Supercharge to destroy it. The player must hit the corresponding button in the right order before the time runs out. After that, Super Sonic charges at the robot and the cannon backfires at Eggman 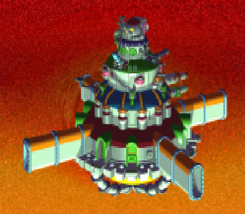 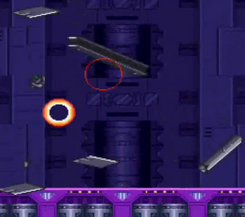 Destruction of the Egg Fortress (Inside)
Add a photo to this gallery
Retrieved from "https://sonicfanon.fandom.com/wiki/Egg_Fortress?oldid=1445903"
Community content is available under CC-BY-SA unless otherwise noted.