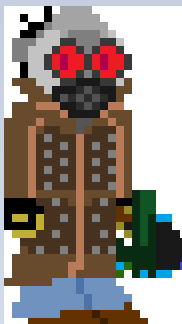 He is a furless alien, he doesn't even have a nose (besides nostrils), but he does have quite a bit of black hair on his head, sooooo....yeah, and he stands at a whopping 6' 4.Wearing a large dark brown trenchcoat, sneakers, a dark greyt-shirt under his coat, a pair of blue jeans, and a small, grey gasmask with red lenses on his face. He also has a large holster on his back for a rifle, two holsters attached to a somewhat large brown belt on the sides of his pants, and black, fingerless gloves.

He is some what of a maniac, but has some standards. Very, very secretive of how he is around just regular people most of the time. When in combat, he acts like sort of a berserker and a madman, using whatever there is nearby as a weapon and killing his enemies in the most brutal ways. He is a very, very bad man, but does have at least some good in him. He is also very aware of his unusual appearance (which is due to the fact he is an alien and such) and is somewhat sensitive of it

Growing up on a colony ship named SERENITY (considering a few months prior his home world, Galivus, had been war torn by nuclear bombs), he had live a horrid life (even as the captains son). Military training, thievary, murder, all of which he has either seen, taken apart in (all of those, he never really wanted to do) or have had happen to him (besides murder, obviouslly). At the age of 15, he was forced off of it when the captain had been killed, and an uprising had occured. Leading to the deaths of many SERENITY personel. He had then, after a month or 2, landed on mobius. He has since then been residing in Mobotropolis. In a crappy apartment.

He actually doesn't have any real powers besides strength and natural night vision.

He is able to break through most weak walls by charging at around 25 MPH into them, as well as the ability to see in the dark.

He is very skilled with conventinal weapons, and is pretty good at driving ground vehicles (either Cars or Motorcycles). He is also able to hold his breath for quite a while, and is pretty good at spotting stuff that is out of place. He also has a remarkable resistance to fire, taking much longer to be ingulfed in flames then most.

He doesn't exactly have any powers, so he doesn't have any "Psychic Shields" or any of that, But he is pretty much weak to what anyone else without powers is (Besides fire, of course!). In more detail:

Retrieved from "https://sonicfanon.fandom.com/wiki/Edwin_.G_McKorvy?oldid=1799904"
Community content is available under CC-BY-SA unless otherwise noted.