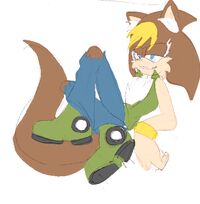 Edward Paramore, also known as Eddy the Hedgefox, is the future son of Alfred the Ancient and Laina Paramore. He is the brother of Alice Paramore and does his best to get on her nerves. Despite this, he and his family get along well despite the constant antics he creates around him.

He is also related to the children of Hamaveck the Hateful, Malice and Dexter Marapore yet he doesn't get along with them, unlike Alice who tries her best despite them being evil.

Edward and Alice were born in the Mobotropolis State Hospital to Alfred and Laina. Since birth Edward showed signs of possessing Chaos Abilities in high quantities, having nearly wrecked the nursery he was staying in after birth after having a nightmare caused by who was in the same nursery at the time.

As Edward grew up, he showed a talent for pranking and loved to organize elaborate jokes on his nursery friends even at a very young age. After causing certain non fatal accidents at the nursery with his uncontrollable Chaos Abilities, Edward and Alice's parents decided to home school the both of them, both in simple school work and also in ways to control their abilities although Edward was the only one who showed true promise in having any.

Despite being home schooled, Edward had a large circle of friends and enjoyed having fun with them. He kept these friends into high school which was his first educational experience outside of being home schooled. By this stage, Edward had pretty much mastered his Chaos Abilities and was learning the advanced set by this point.

Edward can easily be described as being a real ladies man. He loves to flirt with girls and has admitted that his favourite past time is robbing other guys of their girlfriends. Despite this, Edward is never malicious about it and simply states that its "nothing personal. (He) just likes doing it". Edward also loves to cause trouble and has been given more detentions at his school than his entire year combined because of it. Because of this, he's been given the nickname "The Prankster King of Pranksters", a monicker he revels in.

Ed is also incredibly prideful about the fact that he is the son of Alfred and Laina and considers himself slightly above most other people due to this status, a characteristic that gets on a lot of peoples nerves. His relationship with his sister can also be rocky at times. He gets on her nerves constantly and he loves to interupt her when she's thinking or concentrating. However, despite this, he still loves his sister and would happily put himself in harms way to save her.

Having been born from Alfred the Ancient and Laina Paramore, Edward possesses a great deal of chaos energy that gives him numerous abilities and talents. While still being quite young, Edward has not fully mastered his craft but he has been shown to use abilities such as:

While these abilities appear to be the only ones that Edward has been using, he is also in training to practice his other potential skills.

Retrieved from "https://sonicfanon.fandom.com/wiki/Edward_Paramore?oldid=1779978"
Community content is available under CC-BY-SA unless otherwise noted.