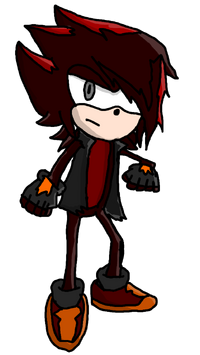 Edgy the Edgehog is a main protagonist of the series Sonic Fanuverse. He has been in Sonic O' Central since 2013. He was recruited by Randomicalz to join the Meme Teme to stop the vandals and spammers who raided the city.

Edgy's main theme is a slightly more realistic cartoonish style in which shading is included. Edgy is a dark-red hedgehog with red stripes. He wears a torn jacket, a pair of gloves named the Gloves of Edganeth and a pair of dark and edgy shoes.

When noticing a raid of spammers and vandals, flashbacks appeared about his dark-past cliché. He was angry and decided to find out how to stop them. He met Randomicalz, whom requested him to join the Meme Teme. He accepted the offer.

Edgy has a dark-type personaity similiar to Shadow, but tries more hard it.

Edgy can speak Demon Language and has the powers of a Demon, such as growing demon wings, breathing fire and etc.

Edgy's main weapon is the gloves of Edganeth. These pair of gloves can give Edgy all types of edgy weapons, made to look edgy. All projectiles are neon and are one fire. All damage is tripled.

Like all those edgy OCs with those theme songs, Edgy has one too!

Retrieved from "https://sonicfanon.fandom.com/wiki/Edgy_the_Edgehog?oldid=1630795"
Community content is available under CC-BY-SA unless otherwise noted.