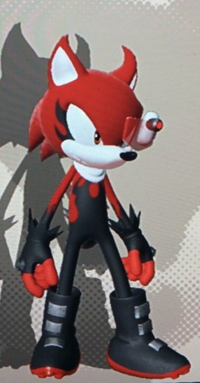 "Infinite, You made me who I am now, Filled with So Much Hate towards you... That alone is a reason I side with the resistance! Unlike you, however, I have friends I can count on! This is something YOU LACK INFINITE!!!! THE THING YOU WILL NEVER HAVE, YOU WILL NEVER HAVE FRIENDS!!!! ALL YOU WILL HAVE IS THIS FANTASY OF BEING STRONG THROUGH POWER WHEN YOU KNOW THAT IS NOT TRUE!!!! I have the EDGE In This battle, not through power but, through my FRIENDS!!!!!!" Edge when Facing infinite in the Chemical Plant.

Edge is a Red Wolf with a Black Flame design that covers most of his body, White Muzzle, black and red Shoes and Gloves and a red scouter.

Edge is pretty much similar to shadow in terms of personality, Brooding, Serious, and very cold with a huge sense of justice. He, however, isn't Evil like Infinite. He is the reason edge acts like this.

He despises Eggman and Infinite dearly and will do anything to end this war, even go as far as Fighting Back even when there is a Very Slim Chance of Victory.

Edge was a middle class Worker, he had a normal life but, when Eggman Invaded the City he was in (most likely Central City, It wasn't stated in the Game). His Life slowly turned Upside-Down. He was Deciding if he should Join Now or Not and he Decided not to and was forced to evacuate. During this is when Infinite Attacked and He was Shivering in Fear, Grabbed the Burst Wispon from a dead resistance soldier and aimed at him. Shaking and afraid he knew what was at stake. Infinite blasted near him, Infinite Spared him and gave him his little bravado before he ditched the scene, Edge Sat there almost petrified, Scarred for Life. This is where he decided to Finally be apart of the Resistance. He personally went to knuckles and offered to be a soldier.

Now a Hero in training, He fights alongside the best of the best. Shadow, Knuckles and many others alongside a few other resistance recruits and now has a place he can call home.

Edge has an unusual Power of his Kind being As fast as Sonic When with him but his max Speed when he was by himself (and without a wisp power up) was clocked at 300MPH. He is as fast as the Dagger GT

Edge Can react slightly faster than a supersonic jet, he can react so quick that it looks almost instantaneous.

Learned through Training with Shadow and Silver. He used a Burst wisp to dash at high speeds, faster than what he could do alone.

Learned during his first fight against Infinite in Metropolis, He Used the Burst Wisp to enhance his Grappling Hook to burn Infinite while latched onto him.

Learned By accident by absorbing a Burst wisp and Used a wire attack on a Eggpawn, which blew up a group of them in the same vicinity in the process.

Learned this when he was in Park Avenue, He used his burst Wispon to propel himself upwards in order to reach higher places he couldn't do with his Grappling Hook.

Edge gets too overconfident in his Skills that he gets wide open.

Retrieved from "https://sonicfanon.fandom.com/wiki/Edge_the_Wolf_(The_Forces_Universe)?oldid=1826238"
Community content is available under CC-BY-SA unless otherwise noted.