Eclipse the Kitsune is the brainwashed older brother of Mystery the Fox and is currently under Uriah the Echidna's control and command. 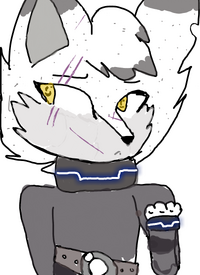 Eclipse is a white fox with gray markings, gray "speckles" scattered all over his fur, and a light gray muzzle, stomach and tail tip. He has striking gold eyes, which are almost seductive. His fur in general is very sanitary and neatly kept, as he does a lot of grooming. His muzzle is also quite defined and long. Despite being a Kitsune, he hasn't earned another tail yet, as he is extremely young for one. His scars "breaks apart" his beauty slightly, and before his brainwashing, he was ashamed to show himself in public. Prior to being brainwashed, he wore simple, Asian-influenced clothing (he and his family hail from a fictional country based off of China, Korea and Japan). However, post-brainwashing he wore a strong suit of black, white and gray armor with a belt, engraved with ancient writing and designs. He wears a collar with the suit, a collar that prevents him from resisting Uriah's control. Occasionally, he can be seen without his helmet that comes with the armor.

Prior to being brainwashed, Eclipse was a nervous wreck. Often shy and timid, he was a very antisocial cub, isolating himself from other Mobians. Eventually, with the help of his parents, Eclipse started to calm down, though not completely. He had a difficult time making friends, as they saw him as a "dork". As years passed, Eclipse became more and more mature, growing out of his shy and antisocial attitude. He became a relaxed, friendly Kitsune. But after being brainwashed, almost all traces of his personality disappeared, and Eclipse was left as a dull, almost mindless slave, determined on only the tasks he was given.

Eclipse lived a slightly difficult life as a child. He barely ever spoke, and was extremely timid. Because of this, the other children in his village thought of him as queer (as in strange, not homosexual), and even mocked him. He would often go to his mother for comfort, as he felt that she was the only one who could truly understand him. His father was at work all day, so Eclipse seldom saw him. Because of this, he was never really close with his father.

Years went by, and little Eclipse slowly grew out of his shyness. He and his sister often played with the idea of going on adventures, and one day, they took it TOO far. They snuck out of the village and into the forest, where they encountered a dangerous Badnik. They attempted to fight it off, threatening their lives and earning some wounds in the process. This fight is also where Eclipse got his grotesque scars. Their parents arrived soon after, worried yet frustrated and angry at the same time. They scolded their children, pointing out the fact that they could have been killed. Eventually, the family went home, and the children were sent to bed immediately.

Eight years later, not long after his sister had help rescue some Echidnas from a concentration camp, he and his sister had set up a new mission; raid the mansion of the evil Echidna, Uriah. Though Mystery wasn't too keen on it at first, she eventually agreed. And so the two Fox siblings set off on their journey, searching for the mansion. When they finally arrived, they were baffled to see the mansion heavily guarded; Jake had mentioned that it had been usually lightly guarded, as he had been there, himself. The two foxes were kicked out, but that didn't stop them. Being persistent as he was, Eclipse suggested that they just set up an ambush. However, Mystery resisted, as she pointed that there were too many guards. Calling out on Eclipse as "stupid", she suggested an alternative plan; simply sneak past the guards through a hidden path. Both eventually agreed on the so-called " plan", though it ended up terribly. After hours, they finally raided the castle... but their "fun" was interrupted. Uriah had entered the room with a deadly glare; it was towards Eclipse. He cringed and took a step back. But he knew this wasn't the way to act in situation like this... he gave a growl at the Echidna and attacked. But it was unsuccessful; Uriah had Eclipse in his grasp, right in the neck. The young fox stared to choke; he was completely helpless. Unsheathing a cutlass, Uriah smirked and made a deal.; he would let Eclipse live, but only as a servant of him. If Mystery resisted, then he would have them both slain. Baffled by the utter stupidity of the deal, Mystery agreed to the deal, much to her dismay. Whether or not the brainwashing of Eclipse will be prevented someday is unknown.

(THIS SECTION IS BEING IMPROVED ON.)

Retrieved from "https://sonicfanon.fandom.com/wiki/Eclipse_the_Kitsune?oldid=1796846"
Community content is available under CC-BY-SA unless otherwise noted.