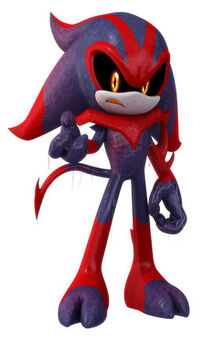 Eclipse is a unique Black Arms soldier in appearance, appearing much similar to Shadow. He is a dark gray/purple coloration with red lines on his head, chest, arms and legs. He has a white muzzle and eyes with black scleare and golden-like slit eyes. He has a classic devil's tail, which is tall and slender with an arrowhead-like tip, a pair of spikes on his arms and a smaller spike on his legs, three fingers on each hand, two toes an each foot, and a "mantle" much similar to Shadow's chest fur.

Sometime after the defeat of the Black Arms on Mobius, Black Death created Eclipse aboard the New Black Comet as the solution of the Black Arms' Shadow problem. As they headed to Mobius for the second Black Arms invasion, Eclipse slowed them for a project known as the "Dark Arms".

When Team Dark arrive in Station Square during the Black Arms' attack, Black Death would spy on them with his "seeing eye" while Eclipse went out to separate Shadow from his team and get him alone. As Shadow engaged the Black Arms, Eclipse stopped him as he casually introduced himself.

From there, Eclipse attempts to convince Shadow to join the Black Arms, but to no avail. Eclipse is left defeat as Shadow moves on to return to Team Dark. Eclipse then moves onto Westside Island where he fights with Team Vixi. Using his monster form, he gives Team Vixi quite a beating before he attempts to finish off Marsha, but Shadow interrupts and saves Marsha's life. Team Vixi manages to get away thanks to Shadow as he prepared to fight Eclipse. After receiving a beating from Eclipse as well, it's revealed that Maria stayed behind before tossing a Chaos Emerald she had found earlier to give Shadow a boost. Shadow defeats Eclipse, forcing him out of his monster form and sending him flying.

Eclipse isn't seen again until he is confronted at in the New Black Comet. Now with the Dark Arms, modified Wisps, he attempts to kill Shadow with his new powers but is once again defeated as Shadow and Maria move on to face Black Death. He is not seen again until after the end credits when he crash-lands onto Angel Island and he begins plotting his revenge against Shadow.

Eclipse is extremely loyal to his race and will do anything in his power to save them from extinction. At times, Eclipse is rather playful in cruel ways and likes to toy with his enimes as seen when he gives Team Vixi a beating. Unlike the rest of the Black Arms, Eclipse has free will and independence and often considers Shadow his brother, despite being created by two different masters.

While loyal to Black Death, he oftentimes question Death's orders as when he tries to convince Shadow to rejoin the Black Arms when Black Death's orders was to kill Shadow. Eclipse shows no care for others outside of his species, a prime example pf this is when he calls Marsha a "weak and inferior creature".

Like Shadow, Eclipse has great control over the Chaos Force and is shown to be quite intelligent. Like all Black Arms, he has the power to communicate through the Black Arms' hive. He also seems to have brainwashing abilities as he uses on Shadow during their first battle. Eclipse also has the ability to block Shadow's Chaos powers and cause hallucinations for him.

Using metamorphism, Eclipse can turn into a more monstrous version of himself with enhanced strength and endurance - enough to defeat Team Vixi single-handedly and to almost defeat Shadow. Eclipse states that his enhanced state makes him ten times more powerful than Shadow, but a boost of Chaos Energy is enough to knock him out of his form.

By allying with the Dark Arms, Eclipse gains 4 new abilities.

By allying with Blurk, Eclipse becomes extremely hard and durable, making it harder for Shadow to break through.

By allying with Cregal, Eclipse's arms are replaced with wings, allowing him to fly at high speeds.

By allying with Cyzer, Eclipse's arm changes into a canon and can shoot powerful lazers.

By allying with Ryhgenta, Eclipse's arm changes and allows him to fire sonic fire blasts.

Retrieved from "https://sonicfanon.fandom.com/wiki/Eclipse_the_Darkling/Marshalia13%27s_Universe?oldid=1859399"
Community content is available under CC-BY-SA unless otherwise noted.