EXE is brutal, to say the least. His goals mainly consist of causing as much pain as he possibly can, because he says it's fun. He is also very intelligent, as he poses an IQ that is twice the size of Sonic's.

EXE was born when Dr. Eggman put all of qualities of "Darkness" into a super computer which Eggman named the Symbiolizer. the Symbiolizer allowed for any thing to be made from pure data, but to power this machine you would need at least one Chaos Emerald. Eggman was beta testing the machine when to his surprise, it actually worked, but as a result, the machine was destroyed. When the smoke cleared, Eggman saw EXE holding the Chaos Emerald. Eggman, being the modest man he is, told EXE how he was made and told him that he was his master. EXE was entertained by Eggman and laughed, EXE than whacked Eggman over the head and flew away. After that, he proceeded to track down Sonic.

Poses the powers of whoever he embodies. Plus EXE has the power to take Darkness, Soul, Misery, Demon energy from someone and use it to get more powerful.

Despite him being very intelligent, EXE is his own worst enemy. EXE never thinks of any enemy as a challenge. As a result, he never really tries to fight as hard as he should, which in turn results in him losing most of the time.

Dark EXE- the first stage of his transformation. After obtaining well amounts of "Darkness" he changes appearance and gains more power.

Soul EXE- the second stage of his transformation. This occurs after obtaining a lot of "Soul" energy. he changes appearance again and gets more powerful.

Misery EXE- The third stage of his transformation. This occurs when he obtains enough "Misery" energy. Though he does get more powerful, he does not change appearance. This is due to the fact that Misery has lowest power level compared to Darkness, Soul, and Demon.

Demon EXE- the fourth and final form of his transformation. This occurs once he has obtained enough "Demon" energy (which is the hardest one to obtain). 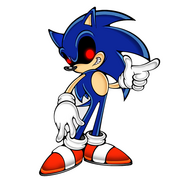 EXE in his Sonic form 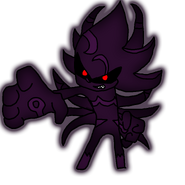 Dark EXE
Add a photo to this gallery
Retrieved from "https://sonicfanon.fandom.com/wiki/EXE?oldid=1749565"
Community content is available under CC-BY-SA unless otherwise noted.