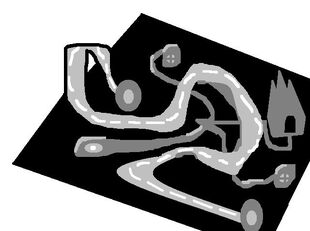 ET's domain to the best of what he remembers.
Add a photo to this gallery

When ET disappeared into his emerald form for the first time, he was surrounded by nothing but white, it was then he used his powers to shape his domain into anything he wants, he tried shaping it but nothing really satisfied him, it was then he made his perfect little paradise (the picture above).

One piece of his domain was a road that goes on forever due to portals being at the ends of the road, the best place for him to train on his extreme gear. At a few times he summons his own sort of copys of himself to race against.

Located at the right end of the picture, his Void Emeralds are placed inside the cave, though none are there until he finds them all.

Are the grey circles. Each matching portal leads to the other identical portal and can go back and forth.

ET can let others into his domain, but not for very long.

ET rests next to the Void Emerald shrine.

There are two pairs of portals.

Retrieved from "https://sonicfanon.fandom.com/wiki/ET%27s_Domain?oldid=392352"
Community content is available under CC-BY-SA unless otherwise noted.